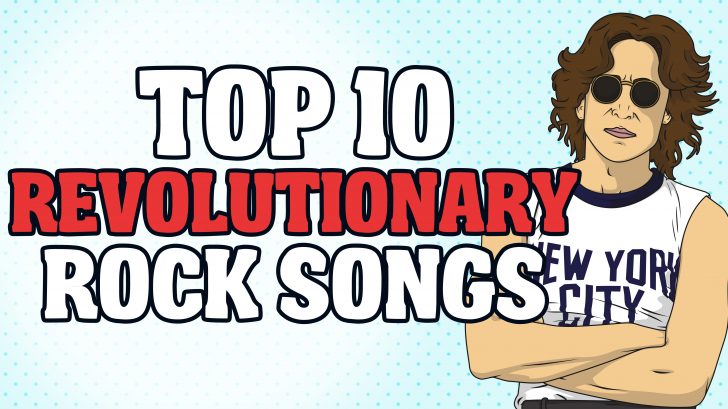 Life Without Music Is Not A Life

Thanks to these revolutionary rock songs that gave us the chance to see the world differently. To see the truth, to view people as equals and be part of the inevitable changes in the world and set as a good example and be a part of the revolution. A violent revolution will always lead to violence, let’s keep that in mind. Musicians who made these songs clearly knew that. They were inspired by events that impacted the state of our world, condemning injustice and raising hope for a peaceful future. They had the balls to reveal the truth for the whole world to see. something we should all be thankful for. They provided the power for positive changes.

A song that talks about the incident during the Dublin football match in 1920 where British troops fired at the crowd and the other incident was on January 30, 1972, 13 Irish citizens were killed by British Paratroopers. Those incidents happened during the Sundays, hence the title Sunday Bloody Sunday. Though Bono tells people during their concerts that the song was not about rebellion.

He began writing the lyrics indicating a hatred or political standpoint against the Irish Republican Army or the IRA. But he changed the point of the lyrics in a more historical way without taking any sides. This song impacted a lot of people and gives awareness that bloodshed can always happen anytime and anywhere not only on Bloody Sundays but any day of the week. This song is a memorabilia for those who have witnessed the events.

A song about the Vietnam war, the very first war that the US didn’t get to win. The sad thing about that war was that those who fought it were ignored by the states after returning from war.  People thought that this song was all about the pride being born in the USA, but it really shows that it was about the shameful way of how America treated Vietnam War Veterans. These veterans were not given any heroes welcome just because they didn’t win the war.

Bruce was surely brave enough to put it out in his song, delivering the message for the people that the US Government somehow screwed the Vietnam War Veterans by not embracing their sacrifices that they did for their beloved country.

A rebellious song against the British Government. Mocking the British national anthem that has the same title that didn’t overwhelm those who were in the position or the Royalty.  The song was banned from being played on radio stations but Sex Pistols still managed to make an effort to promote the song that helped it to become a  number one hit.

This song became the anthem of the punk movement during 1977. Sex Pistols tried to be as horrible as possible by making this song, which is a good thing for those people who felt alienated by the British Monarchy. The band was more of an anarchistic than extremists. The band was pushed away all the time, so they did try to fight against it by offending a lot of people that they thought were keeping them from becoming someone. They surely had the balls to mock the royalty by making good music.

The song suggested an undivided humanity, where there are no politics, religions, wars, greediness, self-righteousness, etc. We can name it all.  Without those things, the probability is the world would be a much better place to live.

This song definitely plays a big role in our hearts because it changes the way we see life. It changes our perspective. It encourages us to live a life with an unrestrained debauchery. Imagine if John Lennon had not been killed, he could have given us more inspirational songs. He surely was the greatest of all time.

No matter what the critics say, this piece of music will always be powerful. It has a positive effect on people’s life. It has a strong message in it, a well-intentioned song. It gives us hope that one day we can all be equal.

The very first politically inspired song of The Beatles that talks about the Vietnam War. The song was written none other than the great John Lennon. He had a different approach writing this song. An idea of how a revolution should be done. You can always start a revolution peacefully, not just by violence.
There are a lot of different versions of this song, the revolution #9 and the slow version. This version turned out to be great despite Paul McCartney not liking the song.

The song was an anti-war protest and during those years there were a lot of anti-war demonstrations all across America. So, somehow this song brings back some of the memories of turmoil in the country that has always been politically unrested. But it also brings back the good times because The Beatles were always great.

The song speaks more on the inequality of ranks and class than the war itself. It was more of a support for the soldiers who were fighting against the Vietnamese. John Fogerty and Doug Clifford were both enlisted in the Army Reserves, they decided to be enlisted so they can avoid being shipped to Vietnam.

The unfairness of the drafts during the war was mainly the focus of this song, where a lot of senators’ sons weren’t drafted during the war. They were the fortunate sons. They never did experience the war like regular soldiers who were unfairly drafted during the war. People who had connections were exempted from the draft and felt safer. This song is very patriotic, questioning the government’s actions of sending its people to fight a war without knowing the reason why. Those people were the less fortunate.

A song that helped Buffalo Springfield to stardom. The most enduring protest song but not about the anti-war gatherings. It was never motivated by the Vietnam War but rather by the young people who were involved in political movements on the issue about the Sunset Strip riots over a curfew for young people.

Implying criticisms of state power. Questioning the government. This is definitely a timeless song that refers to timeless problems. It is as relevant today as ever. Given that a lot of things haven’t changed. Just because it was referencing a specific event doesn’t mean it wasn’t supposed to represent events similar to it throughout the era.

One of the most overlooked songs of Queen. Written by the band’s bass player John Deacon from the male point of view of the women’s liberation movement.

But this song is one of those songs that can be interpreted in a lot of different ways. Wanting to break free from a world that is just so false and corrupt and untrustworthy.  For homosexuals who are not yet out of their closets, this song is perfect for you. Revolutionize your way to freedom. You want to break free, feel free to break free.

A tragic song about tragic events on May 4, 1970. Four unarmed students of Kent State University in Ohio were shot by US National Guard. The reported soldier who opened fire was fresh home from duty in Vietnam. He was suffering from post-dramatic stress.

It was a horrible massacre. Whatever was going on, anywhere in the world, these murders were not justified. People were not learning from their past mistakes. Thanks to this classic rock song it changes our views and perspectives on reality. The song has a lot of political controversies, but let’s not get caught up with that. Let’s try to stick our heads to the musical fact that this song is rocking awesome.

A song solely based on frustrated youth were people’s feelings doesn’t matter anymore. That the changes are occurring in this world. Dylan wanted to acknowledge everyone the changes in the world is inevitable and older generation should join in the changes.

He never meant to condemn any people on this song but rather stating that these people who are in the way should stay out of the way. Seems like no one can understand his message in this song before. This song promotes a much stronger message of supporting the Civil Rights movement, something we know he supported quite strongly.
An all-time classic that will make you think deeper. Bob Dylan surely is the best songwriter in the history of music.