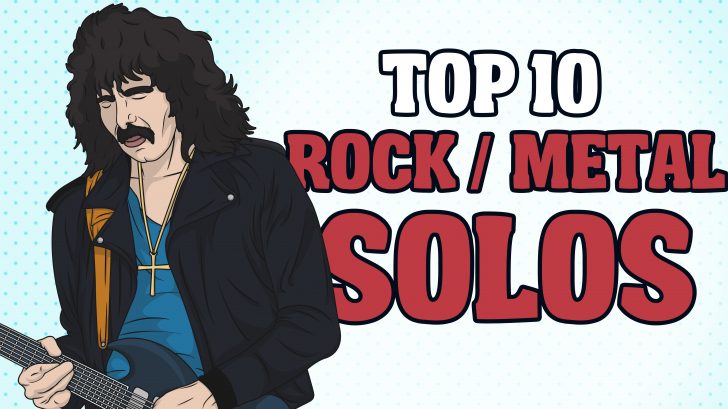 These Axe-Slingers certainly make every guitar players look like an amateur. Playing solos on the axe looks easy. Their solos on their every song are the best way to display their skills, techniques, and talents. Each and every song that has the best guitar solo is ranked mainly for the quality of its composition. Originality, influence, and the definite lasting appeal are all considered.

Every mindblowing guitar solo acts leave us thinking about it for days, years, and even decades! – We all know something about these is extraordinary. In this list, I have compiled of what I have considered being the top ten rock/heavy solos of all time. Tell us what you think. Comment down below.

How do I explain of why Eruption is included in this list as one of the top rock solos of all time. Well, “THE ENTIRE SONG IS A DAMN GUITAR SOLO!!!!” And if you ever want to witness an awesome piece of guitar work, then I would definitely suggest listening to this song by the guitar virtuoso Eddie Van Halen. Even if someone would attempt to recreate or make a cover of this song, they have to have Eddie’s guitar technique as well like in the speed picking parts like he does.

“We recorded our first record on Sunset Sound in Hollywood, and we were warming up for a weekend gig at the Whisky. And I was just rehearsing, and [engineer] Donn Landee happened to record it. It was never planned to be on the record. So the take on the record was a total freak thing. It was just an accident. He happened to be rolling tape.” – Eddie Van Halen

If you really want to see something very different and something cool at the same time, check this freaking song out!

Synyster who you say? The modern guitarist ever, he can shred everything and anything, in any form of song. How can you rank a top 10 guitar solo without including this one? This song possesses such a wide note ranger in which it’s nearly unbelievable.

“I think that was kind of his way of telling us good-bye. Usually when we go in to cut demos, one of us will lay down some mumbling sort of stuff for the vocal melodies, because the lyrics don’t come until later. But this was one of the few times that Jimmy actually used real words when he was doing the scratch vocal. First take, he went right up to the mic, and what came out were these dark lyrics. It was kind of babbling, and it was a little creepy, and also a little weird. But we didn’t think too much about it at the time. Listening to it now, though, it’s like he knew or something. And it’s mind-blowing to hear that.” – Synyster Gates

Mind-blowing, Damn Fast, and Awesome! – Of course. We all love classic rock and highly respect it, but guys, I gotta tell you, Afterlife is a great piece of art. We must admit that it deserves to be in this list! Every note of the solo is blistering with epicness and the melody behind it makes this solo so incredible! Great song with insane guitar solo!

Ever heard a solo that manages to be melodic but heavy at the same time? Well, here it is, one of the best solos by Dave Murray of Iron Maiden.  The solo defines a deep definition and will give you an eargasm in a sec. One of the greatest masterpieces of all time, it never gets old. Powerslave has far better solo than some other guitar hero crap and all. The supreme piece of work!

It has multiple solos and the thing that stands out the most is Dave Murray’s showing that melodic speed. Murray’s guitar solo makes the entire song an absolute masterpiece.

The best guitar solo ever produced by Judas Priest axe-slingers Glenn Tipton and K.K. Downing.  And it defines Metal as we know it! So heavy, so metal. Nothing more to say, it would literally tear the soul.

“I think it’s a wonderful statement. It embodies what metal is – it’s everything a full-on screamy metal track should have. Everybody is going a million miles an hour on it, and yet the melody still comes across. That statement that ‘He is the Painkiller’ – you get 30,000 metalheads chanting it at a festival and it’s a great feeling. It’s become a very important song for Priest, and for metal too, I think.”  – Rob Halford

The solo’s pace is insane, furious and speaks for the song itself. Pinnacle of Judas Priest’s career and in metal in it’s finest form. It has horrifying mood swings, fast-changing pace. The ultimate heavy metal song is home to the finest guitar solo in which fits in perfectly. Two solos on this song. Both amazing. First one has a very touchy melody while the second one has this very aggressive scratches on the guitar! Finest Metal Cuts! VERY POWERFUL! Ohh Wait! Don’t forget the INSANE DRUM SOLO INTRO!

There’s no way to describe the amount of soul and emotion of this song guitar solo. It would easily be in any top 10 guitar solos of all time. It has different of combination, such as perfect speed (but not the fast), the melancholy that gets in your nerves, and the perfect emotive mood. Even the super bassline mirrors the entire guitar solo which is very rare to hear.  If the were to be a metal Jesus guitarist, Dimebag would be it.

“That particular solo was thought-out in a more orchestrated fashion than some of the others I play where I just start ripping right off the bat. The thing that really makes the ‘Floods’ solo come across like it does is [bassist] Rex’s playing behind it. He’s using his fingers and he plays a whole bunch of cool licks and shit in there. He definitely adds to the vibe and feel of my lead because I’m playing off his part a lot — it was a great foundation for me to build on, man.” – Dimebag Darell

Epic, just epic. It’s out of this world! Dimebag Darrell will always live in the hearts of every metalhead forever!

This list wouldn’t be complete if Tony Iommi’s wizardry guitar solo in the song ‘Heaven and Hell” if not included. He rules the guitar and just made too damn perfect. Really fast solo by Tony with the fact that he uses prosthetic fingers. Probably metal’s most influential guitarist!

Awesome Fact: “Heaven & Hell” loudly and proudly announced the beginning of a new era for Black Sabbath, one that didn’t include its famous founding frontman. Though its production is a bit more welcoming than Sabbath’s Osbourne-era material, Iommi sounds just as fierce. The opening riff to this track is the sound of floodgates being opened.

Super complex and in the same way the riffs ties perfectly with the solo. Well, for one thing, it’s Iommi for goodness sake! It’s absolute perfection, without a doubt. So if we are talking about 10 ten solos in this has to be included. The beauty and emotion and the overall quality define it all!

One of the greatest axe-slingers who ever lived on this planet. Mr. Randy Rhoads, ladies, and gents. He shows his jaw-dropping, mindblowing, and most definitely epic guitar skills in this solo, which highlights his guitar beastly technique and insane creativity with awesome riff-making. – You Rest In Peace, you’re THE BEST in my book!

Awesome Fact: “Mr. Crowley” is a great example of both his striking guitar technique and creative riff-making, skills that helped Ozzy escape the long shadow of Black Sabbath and establish a solo career. Rhoads worked on two albums with Ozzy before his untimely death in 1982 at age 25. Rhoads died during a tour stop when he went up in a small plane and the pilot started buzzing the tour bus, trying to get a rise out of Osbourne, who was in it. The plane lost control and crashed, killing Rhoads, the pilot, and the tour hairdresser.

There is just something about this solo that is just elevated. What would have Tony Iommi thought when he heard this new kid Ozzy Osbourne had hired? He might have felt so inadequate… Randy Rhoads was a master guitarist and amongst the top, his solo on this song is the perfect evidence.

A very rare and so sensational guitar solo, you can feel the heartache of the guitar in this solo. And if someone seriously says that Slash is overrated, you should slap them in the face and make them eat this solo for breakfast!

Awesome Fact: The song contains the longest ever guitar solo in a Top 10 single. Actually, Slash plays a few guitar solos in the song ( depending on how you see it). As I said, the lengthy artistic visions of Rose had to be cut down, along with the guitar solos of Slash… (the song was shortened to almost 9 minutes).

Slash’s notes in this solo came from the heart with so much emotion that you can hear like the guitar is talking to you. And you can’t just hear this solo without pretending you’re with a guitar in your hands, playing along. – Like you’re so baked, and the feeling is so incredible.  You could just listen to it all day long…

Either you’re a Metallica fan or not, it’s hard to argue that they’ve produced some of the heaviest metal music histories. “One” guitar solo shows Kirk at his awesome moments, plus with his signature down-picking style. You can definitely sense the anger and rage in his guitar solo. – Hammett’s unforgettable solo.

“Specifically, this is the middle solo of the song. Much like ‘Enter Sandman’ it’s a solo that everybody can pretty much sing along to, and it definitely gives me a really good feeling every time I play it.” – Kirk Hammett

“One” guitar solo is really difficult to play too. Tapping, Sliding, and Bending? What else could you beg for? The speed of the solo and the departure from Kirk’s somewhat repetitive pentatonic solos. And you would be lucky if you could get to its speed. Kirks best talents in a solo finger tapping trills etc. (guitar nerds, you know what I mean.)

Marty Friedman’s insane guitar solo will give you goosebumps every time you listen to it. Perfectly constructed solo with a combination of beastly guitar skill, technique, heavy metalness, and sweet aggression. The way Marty Friedman play the solo and minute build-up, it’s just WOW, creating intense anticipation. It gets you every time. Now, that’s what you call a guitar solo, that’s how you do it, how it needs to be done!

“When I finished the solo to this one, Mustaine came into the studio, listened to it down once, turned around and without saying a word, shook my hand. It was at that moment that I felt like I was truly the guitarist for this band. “ – Marty Friedman

Tornado of Souls is definitely one of Megadeth’s more difficult solos. The vibrato bends, and the perfect slides, the hardest thing to do. That’s the sad but honest truth for any guitar players.