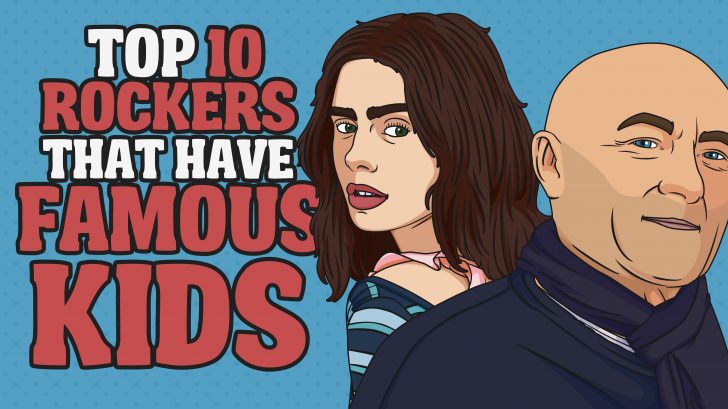 Following Their Footsteps.. Sort Of

It’s not easy having rockstar parents even more so if you’re following their creative path. Take Jason Bonham for example. He’s a darn good drummer but if your dad is Bonzo, chances are, people are going to compare you every single chance they get.

Some kids prefer a simple, quiet life away from the limelight but others, of course, pursue their passion. From musicians to Hollywood A-listers – we’re listing down these rockers whose offsprings also managed to make names for themselves.

Sean Lennon looks a lot like his father – so much so that it’ll give you goosebumps. And being John Lennon’s son, he enjoyed a few perks such as having Elton John as his godfather or receiving one of the first Macintosh computers from Steve Jobs himself. And he did follow on his parents’ footsteps by venturing into the music industry.

He is the spitting image of the Quiet Beatle and he also happens to be multi-talented in the music department. He’s a composer, songwriter and a multi-instrumentalist at that. Plus, he has also collaborated and performed with other legends like his father’s close friend Eric Clapton, Pearl Jam, Prince, Tom Petty and Jeff Lynne.

We’ve known her since she was a baby. She’s a model, a visual artist and musician. A few years back, she was also an intern for the Rolling Stone magazine.

Just like his dad, Jakob is also a prolific songwriter. He penned some of his band’s (The Wallflowers) biggest hits like “One Headlight” and “6th Avenue Heartache.”

Practically thrust into the limelight because of their MTV reality show The Osbournes, she eventually became well-known as a host for popular TV shows like Dancing with the Stars and Fashion Police.

Anyone who’s in the world of fashion knows Stella McCartney. In fact, since she supports animal rights just like her famous parents, she has become well-known for using vegetarian leather in her products.

She’s more than just a pretty face because Lily Collins is also the celebrity ambassador of anti-bullying organization Bystander Revolution and she has earned recognition with her various movie roles. She even wrote her own memoir “Unfiltered: No Shame, No Regrets, Just Me” where she pens an open letter to father Phil.

Aside from playing with the members of Led Zeppelin, Jason has also shared the stage with Paul Rodgers and Slash. He even recorded with Joe Bonamassa and collaborated with Glenn Hughes. Back in 2014, he was part of Sammy Hagar’s The Circle. And to top it all off, he has toured extensively with his very own Led Zeppelin tribute band.

Liv Tyler has numerous films and awards under her belt. Interestingly, she met Steven only when she was already eight years old.