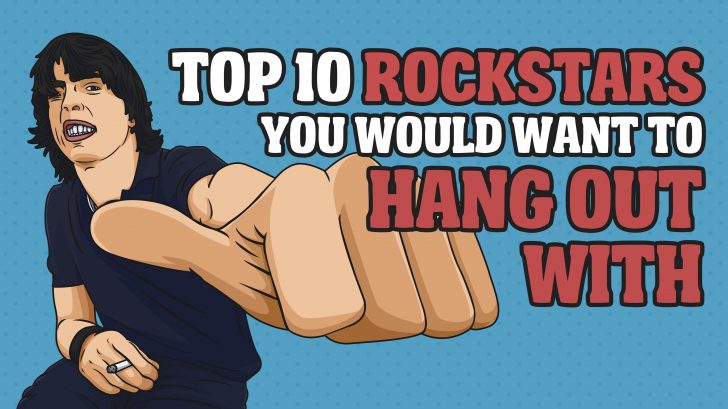 Ever wonder what it would be like to have a rock star as a friend? Someone cool and down-to-earth to just hang out with, maybe have a beer or two with on a weekend? Sure it might be wishful thinking, rock stars are kind of a different species of their own. Our layman notion of their lifestyle includes booze-addled all night partying and snorting drugs to be able to write songs that are out of this world. Do you ever think, “would I survive such a reckless lifestyle”? Will, it’s nice to think which rockstars would be great fun to spend time with. Here are 10 rockstars who we think would be great people to hang out with. Which one would you choose?

It’s already widely known how cool Slash is. He’s down-to-earth, he loves animals and seems like someone just super chill to hang out with. He’s shown that he is compassionate and great with fans, so it wouldn’t be out of his nature to be a great buddy. He seems like he’s a good shoulder to lean on. You’d never be bored hanging out with this legendary guitarist, just talking about anything from music to snakes for hours on end.

The Iron Maiden frontman seems like the ultimate renaissance man — singer, songwriter, musician, airline pilot, author, entrepreneur, and broadcaster. Who wouldn’t want to spend time with him and pick his brain, or just simple be in the presence of a multi-talented artist. With a personality exuding with energy, surely some of his positive vibes would rub off on you just by hanging out with him. He’d even have a pint of his signature Trooper beer with you while talking about his vast life endeavors.

They say it’s a hit or miss with the iconic U2 frontman. But when it’s a hit, he seems like a nice guy to have a conversation with. He’s more than just a musician, he’s also a venture capitalist, a businessman, and a philanthropist, really rooted in the causes he cares about. He generally seems like a cool, organized, and loyal friend to hang out with, wanting to get to know him better with every minute you spend with him.

??• • @Regrann from @ u2reiniertje – Today, 7 years ago in a very hot New York City Street. Outside the David Letterman Studio. This was the first time meeting Bono and i will never forget it! #u2 #bono #theedge #celeberity #newyork #newyorkcity #nyc #hotsummer #summer #summerinthecity #memories #instadaily #instagood

Behind the glamorous 80s rock outfits and iconic superstardom, doesn’t JBJ just seem like a pretty chill guy to hang out with? He’s remained loyal to his high school sweetheart, to whom he has been married for 29 years, and loyal to his hometown of New Jersey. He’s a political activist and philanthropist and regularly does feeding programs in his hometown. He’s also dedicated to his fitness and runs 6 days a week along with doing yoga on a regular basis. So, if you want to be healthy and inspired, Jon Bon Jovi is the best guy to hang out with.

If there is any rock star you wish have tequila shots with, have it with Sammy Hagar! The former Van Halen frontman built an entire business empire on tequila. He is quite the entrepreneur, creating successful business ventures based on his passions: booze (also beaches and bikes). People who have met him at his chain of restaurants say he is humble, polite, and easy to talk to. And we’ll take their word for it, makes you want to hang out with him more, doesn’t it?

The Alter Bridge and Slash musician is known as probably one of the nicest musicians in rock music. He believes in the power of optimism through music and surely when you hang out with him, he would rub off some of that optimism to you. He seems to be very easy going when he communicates with his fans, more so with his friends. He also remains extremely humble throughout his success, and a humble man is always a good person to just be around with. And imagine just sitting back and having Myles Kennedy jam out one of his songs on his guitar while having an ice cold beer with him. What an awesome time that would be.

He’s one rock n’ roll’s most controversial artists, a pioneering icon of shock rock, you’d think Alice Cooper is all about wild antics but he’s actually just a regular nice guy…so he says. When he’s just hanging out, he won’t throw a live chicken to its death at you or release a bunch of spiders just because. No, in fact, he’d rather play golf. Alice Cooper is an avid golfer to the point where he even wrote a book called Golf Monster: My 12 Steps to Becoming a Golf Addict. He’s mellowed down from his wild younger days, and hanging out with him would include a trip to the golf course, and maybe an invite to his Bible study group or one of his jam sessions with Johnny Depp and Joe Perry.  Behind the facade of being the face of shock rock, Alice Cooper is courteous and warm in real life.

Telling John B about the time I had a loaded .38 on #Elvis and actually considered wounding him・・・ #Repost @cerealkyler

Anyone who has ever met Steven Tyler says that he’s extremely nice and fun! The ubiquitous front man of Aerosmith, one of America’s most iconic successful rock bands, truly has fervor and passion for life. And doesn’t that just make you want to have a drink with him and maybe belt out “I Don’t Wanna Miss a Thing” in a karaoke duet? Those who have had the honor of working for him say that Steven is incredibly friendly and remembers people’s names and faces. So surely, one night of fun with Steven Tyler will be memorable for him and for you!

The music-other-half of Steven Tyler, Joe Perry is also a really nice guy in real life. They wer called the “Toxic Twins” at one point but hanging out with Joe Perry isn’t toxic at all. In fact, he’s such a health nut he was into the organic eating habits even before it was a trend. He says he was “hip to a healthy diet long before anyone else was” (except for the drugs and alcohol of course). But he’d probably be a good balance of having a good time and being healthy at the same time. He’d probably totally drink two cases of beer and eat salad for dinner with you.

It is no argument that Dave Grohl will be probably the ultimate nicest dude in rock you will ever meet if ever you had the chance. He’s cool, he’s funny, he’s mad talented, and he’s friendly to a fault. If you want to hang out with the most down-to-earth rock star, well, Dave Grohl is your man! The rock icon genuinely cares about his fans and fellow musicians and will go out of his way to please and serve them. If you had a chance to spend even just an hour with Dave Grohl, you’d probably have the best time of your life.