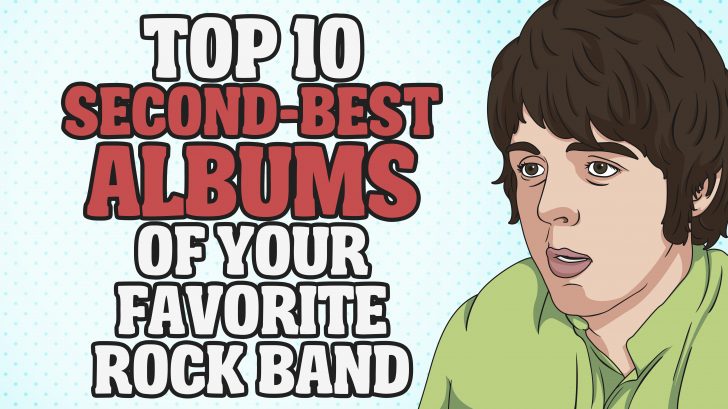 They say that second place is just the first place loser. While that saying might be harsh, it’s arguable that second place is often overlooked and underappreciated. It’s a phenomenon how somehow when something ends up below first place, it loses its relevancy. Well, it’s high time that second placers get a second chance. Let’s shine some spotlight on these rock albums that although would never rank first place, deserve as much attention for the quality of music and the obvious effort that was put into producing it.

See the list of the Top 10 Second-Best Albums of your favorite rock band below:

The band’s 1975 classic hit album of epic proportionsToys in the Attic was a tough act to follow. Understandably, a follow-up album after that would not reach the high peak as the one that preceded it has. Aerosmith’s fourth studio album Rocks still showcased the band at their most creative. It’s not much of a stretch from Toys in the Attic, but it did rock harder at times. It also spawned such classic hits including  “Back in the Saddle,” “Rats in the Cellar” and “Lick and a Promise”. Rocks definitely proved to the world that Aerosmith that they had more rock n’ roll to offer than expected.

It’s always going to be a gamble for follow-up albums to successful ones. And that was what Allman Brothers Band’s 1972 album Eat a Peach was. It was a follow-up to the band’s chart-topping breakthrough live album. The double LP was initially supposed to be the band’s third studio record before Duane Allman’s untimely tragic demise due to a motorcycle accident. The album was instead released as a tribute to the late guitarist and it included new studio songs along with some tracks that weren’t released from At Filmore East.

With four Grammy awards, 32 million copies sold and being number one for 27 weeks at the charts, The Beatles’ Sgt. Pepper’s Lonely Hearts Club Band can be argued as its best album instead of second-best. For what it’s worth, Sgt. Pepper’s Lonely Hearts Club Band is considered as one of the greatest psychedelic rock records ever. With the inventive mix of kaleidoscopic sounds and textures, it’s no surprise that this album is surely a colorful masterpiece.

There is no denying that Black Sabbath’s 1971 album Master of Reality was a true metal powerhouse record. One of the greatest things this album gifted the world with was the six full songs that made an impact in the world of metal rock (including the two instrumental tracks “Embryo and “Orchid”). With the ultimate marijuana anthem “Sweet Leaf”, this strong and sweet album is the band’s ultimate runner-up.

Of course, nothing will beat Bon Jovi’s most successful record to date Slippery When Wet. But we are focusing not on the most successful but the second-most successful album which is the follow-up to Slippery When Wet, 1988’s New Jersey.  The band certainly expanded and solidified their signature pop-metal sound on this album with riveting songs such as  “Lay Your Hands on Me” and “Love for Sale”. Bon Jovi continued to prove that they are out to dominate with these unforgettable twelve tracks they have contained in this album.

It’s not as perfect as Dark Side of the Moon, but it fairs close enough. Pink Floyd’s 1975 album Wish You Were Here is nothing short of extraordinary, debuting at number one on all major charts. Even David Gilmour and Rick Wright themselves consider Wish You Were Here as their favorite Pink Floyd Album among their long and hefty discography. It’s a pity how underrated this album is, producing phenomenal tracks like “Shine On You Crazy Diamond”, “Welcome to the Machine”, and “Have A Cigar”. But of course,  nothing beats the iconic status the title track has reached.  Evidently, this album is more stripped down than it is amped up, in a way mourning Syd Barrett’s departure from the band.

Coming only second to 1970’s In Rock album yet Machine Head remains probably Deep Purple’s most influential album, containing such pure, timeless, and iconic songs such as “Never Before,”  “Space Truckin’,” and the greatest riff of all riffs in “Smoke on the Water.” Machine Head was certainly a turning point for the band, as it was the album in which they made a name for themselves beyond the U.K. With Machine Head, Deep Purple found their niche sound and it set the signature for the band’s future records.

With six of Hysteria’s 12 tracks hitting the top 20 US hits, Def Leppard made good with this record and it’s just its second-best, coming in close with the masterpiece that is Pyromania.  It was also another pivotal era for the band with drummer Rick Allen losing an arm due to a near-fatal car accident and yet he still came out on top. With 25 million copies sold worldwide, Hysteria is indeed the second-biggest album of the band’s career, only next to Pyromania. Ironically, it is also their most experimental and most miraculous record to date.

Desperado was the Eagles’ very ambitious sophomore effort. Ofcourse it is no Hotel California but this overlooked record has a few gems to it. The title speaks of the theme it’s trying to convey: Old West. This record was a concept album that did not even make the charts upon its first release, but it did give us quite a few hefty singles such as “Tequila Sunrise”, “Outlaw Man”, and its title track “Desperado” (which unfortunately was never released as a single. Though the album did not achieve much success right away, it did eventually attain classic status over time, proving that some records just get better with age.

By far the heaviest of all Led Zeppelin albums, II  is innovative, inventive, and staggeringly appealing. Ultimate classic iconic songs emerged out from this album, the most recognizable being “Whole Lotta Love”. Some great rock staples also include “Heartbreaker,” “Ramble On,”  “The Lemon Song,” as well as sultry tracks like “What Is and What Should Never Be” and “Thank You”, and of course,  “Moby Dick.”

Mainstream audiences at the time received the record quite generously and it lives on even until today, almost 50 years later.