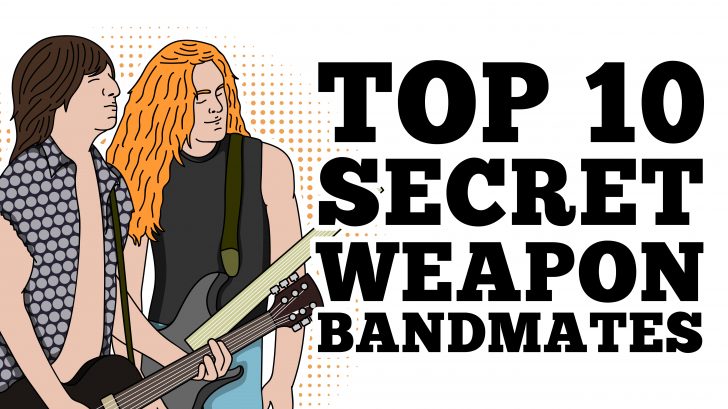 Some bandmates shine brighter than the others but that doesn’t necessarily mean they’re better musicians. On the contrary, there are those who prefer to stay in the background but when you listen closely to their music, their contribution is simply invaluable. Without them, the group COULD crumble easily.

In every show, someone else is the star but the ‘secret weapon bandmates’ still bring so much to the table. Some of it go unnoticed but every loyal fan knows they are as indispensable as the more popular members. They may even be underrated artists in their respective fields – getting less credit and recognition than they actually deserve.

Thus, we are making a list dedicated to these sometimes-overlooked masters of their craft. If you have something to add, let us know in the comments.

Stewart Copeland is criminally underrated. All you need to do is watch him do his thing so you can witness his sheer brilliance as an innovative drummer. He had that groove and creativity to become the glue that held The Police together – sorry Sting superfans, that’s the truth.

No one can play like him because he may not be flashy but everything he does on drums is technically difficult. He didn’t follow anyone’s style instead, he created his own. He’s a rock powerhouse – his timing, precision and rhythm are incredible. It’s hard not to be impressed and blown away.

Ringo Starr memes are all over the internet but perhaps his only misfortune is being a part of the biggest rock ‘n roll band of all time with bandmates who are multi-instrumentalists and prolific songwriters. Just imagine the pressure on him to be the best, keep up with the rockers, and essentially compete with other Kings of Slam.

Ringo Starr’s brilliance was perfect for The Beatles. He has mad skills and is clearly a master of his craft. Anyone who thinks otherwise only needs to listen to The Fab Four’s songs – what would they be without Ringo’s rhythm and beat?

He’s an underrated talent but he’s also the heart and soul of Guns ‘n Roses – no question about that. We know Axl Rose and Slash are always the first ones to come to mind when you think of the band but music-wise, Izzy Stradlin holds his own. He’s a rhythm guitar giant with that incredible feel and groove.

He’s not over-the-top or too flashy. In fact, perhaps it’s his simplistic style which adds more oomph to GnR’s music. Oh and let’s not forget his stellar songwriting skills too.

“The music I was into and wanted to play lent itself better to the guitar. I was always into hard stuff, the Ramones, the raw power that stuff had, the sound of the chords.” – Izzy Stradlin

He’s an essential part in crafting GnR’s sound especially in the early days – you can tell the difference without him. He makes great music – enough said.

A creative bassist for sure, Geezer Butler knows how to slap that bass like an absolute madman which basically makes him perfect for the heavy sound of Black Sabbath. He has massive influence on other metal bassists and that only adds to his greatness.

Besides, anyone who has seen him live can attest to the fact that he’s far from your run-off-the-mill bassist.

“I don’t really listen to modern metal music these days. If you try and imitate you just look like an idiot. Especially at my age, if you try and catch up with what’s going on now it just doesn’t work. You’ve got to be true to yourself and play what you like doing.” – Geezer Butler

Being in a band with one of the greatest guitar players in the world, Tony Iommi, you need to step up your game to keep up. Geezer Butler did that and more. Although he may slip under the radar, his contribution to Black Sabbath’s music is undeniable.

Here’s the thing – when you’re in a band with Freddie Mercury, you will never ever share the limelight with him. Fading into the background is not exactly a bad thing because well, it’s just a universal truth. Freddie Mercury is Queen – he’s the one who took their Live Aid performance to the next level and secured their spot in the rock ‘n roll pantheon. But…

John Deacon has his shining moments too although most of them go unnoticed.

“If I’d just been a bass player all my life with the band, I wouldn’t be as satisfied as I am because I only consider that as part of what I do. The songwriting and being involved in the decision making processes means I’ve been able to have a part in the bands destiny.” – John Deacon

He was quietly doing his job and he did it with such passion. He might be somewhat invisible (all eyes were always on Freddie Mercury) but his bass lines were nothing short of stellar. He’s a pretty shy musician but he’s a beast in the bass.

Okay for the record, we have nothing against Lars Ulrich (HA.HA.) but he’s far from being Metallica’s secret weapon. Cliff Burton, on the other hand, is an entirely different story. He was gone too soon but if he were still alive today, we can only imagine how much bigger the legendary band could have been.

He was masterful of his craft and he was what Metallica’s sound was all about.

“My favourite song is Master. I think it’s the best Metallica song yet. The lyrics are getting a lot better.” – Cliff Burton on his favorite track from ‘Master of Puppets’

He had technical prowess and the man was so dang fast. He is one of the most talented and gifted musicians to ever pick up a bass guitar. And it makes us wonder what he would’ve thought of “St. Anger” and if Metallica would even end up releasing that much-hated album had Burton been around.

Another quiet member of the band who lets his playing do the talking. Besides, all you have to do is listen to “Echoes” to understand what we mean. He may not be the greatest lyricist in the band but he was undeniably the soul of Pink Floyd.

It’s unfair that he remains underrated and with all his sheer brilliance, he still didn’t get the recognition he richly deserved.

“He was gentle, unassuming and private but his soulful voice and playing were vital, magical components of our most recognised Pink Floyd sound.” – David Gilmour on Richard Wright

Pink Floyd owes a large part of their success to Richard Wright. Incredible skills and soulful playing – he was an influential and iconic virtuoso. His work is simply phenomenal and he was way ahead of his time. Listen to some of Pink Floyd’s epic tracks, it was him who created the atmosphere of the songs.

His style, range and versatility – Alex Lifeson knows how to make his guitar sing. This is the man responsible for some of the greatest riffs in rock music. He remains unmatched in the axeslinging department and his solos are groovy but complicated.

Alex Lifeson is the backbone of the power trio. He’s daring and unafraid – and that’s perhaps why he remains an influential figure in rock. He pours his heart into those blistering riffs and while those unforgettable solos make up a huge part in Rush’s sound, he remains modest.

And yet, he still displayed humility. Talent-wise though, without question, Alex Lifeson is a rock god.

He’s an underrated musician even though he belongs in one of the greatest rock ‘n roll bands of all time. Perhaps it’s because Robert Plant, Jimmy Page and John Bonham all had their ‘showing off’ moments. JPJ, like the other ones on this list, are almost always in the background. The rest of his bandmates often get the credit (not that they don’t deserve it) but let’s be honest, he’s just as talented.

“John Paul Jones and I were very good friends. … I gave [him] harmony lessons, believe it or not.” – John McLaughlin

JPJ did much for Led Zeppelin – he was more than a bassist. He also helps with arrangements and even occasionally plays the keyboards and guitars. Still, somehow, when people think of the band, they think of Plant or Bonzo or Page.

He’s a virtuoso and his bass lines are nothing short of exceptional. Just ask Plant and Page.

1. John Entwistle (The Who)

John Entwistle was way ahead of his time. Whoever you favorite bassist is, chances are, he’s been influenced directly or indirectly by Entwistle. He’s easily the greatest bass player to ever walk the earth. Besides, he had to keep up with Moon the Loon. That in itself is already quite an accomplishment.

He didn’t slam his guitar like Pete Townshend or set off explosives in his instrument like Keith Moon but it was clear that The Who’s sound had so much to do with Entwistle’s playing.

“The only thing I tried to avoid was writing six more songs about death, suicides and creepy-crawly things.” – John Entwistle

He was the quiet one of the band. But when you’re sandwiched between two larger-than-life personalities who seem to enjoy destroying everything in sight after each performance, you don’t always get noticed. Still, he makes playing those melodic bass lines look so easy. The man was overflowing with talent.