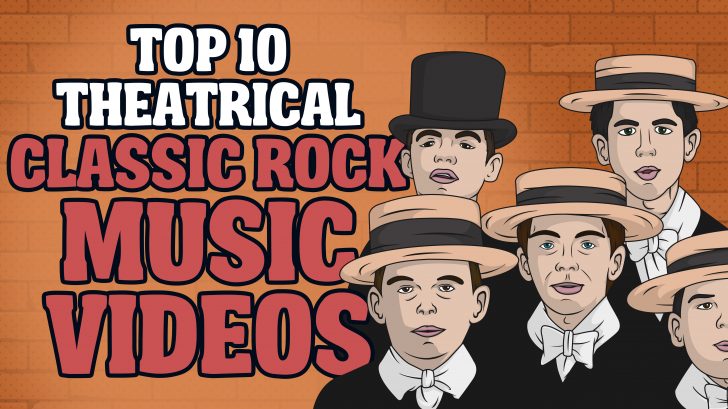 Music Is Not Only For The Ears, It’s Also For The Eyes!

One of the most important parts of a song is its music video.

Sometimes you understand a song fully just by watching its music video it prompts a recognition from audiences. Classic Rock music videos were the golden age of music videos. However, they’ve become a lost art form since there aren’t any TV stations that really show some of these videos anymore and no one even bothers to put effort into them. That being said, we see music videos as a new art form and not usually just an interpretation of the music, there are numerous of these from the last decades and they are still one of the excellent examples of music videos. So, check them out down below, the Top 10 Theatrical Classic Rock Music Videos.

The song itself is about surrealism and imagery.  It doesn’t really carry some kind of message, just pure artistry.  It represents different stereotypes of Middle America being swallowed by a black hole.

No matter how it shows the combination of surreal and the apocalypse, the band kind of distance themselves while playing their instruments, seemingly differing themselves to the weirdness around them.

The content of the video of Janie’s Got A Gun is very serious. The whole basis of the song: sexual abuse, rape, incest, and the death of the abuser.

Janie is a sexual abuse victim by her father for several years, and have taken vengeance against her father. Gunning him down.

Not only that the music video is amazing but the lyrics are well-written and purely awesome. It’s a great song especially for people that it does relate to, making them not feel very alone.

The last chorus will give you goosebumps when it says, “She said ’cause nobody believes me, the man was such a sleaze he ain’t never gonna be the same.”

A dramatic video that was partially inspired by the movie Johnny Got His Gun, originally a novel which was written by Dalton Trumbo in 1983. The anti-war novel that tells the story of an American soldier in World War I who has been disfigured by a landmine.

You will love every bit of this video. A slow ballad at the beginning and turning into staccato heavy metal at the end.

On September 8, 1976, George Harrison was found guilty of “subconsciously plagiarizing” the melody from the songs “He’s So Fine” and “My Sweet Lord.”

In the music video, Olivia Arias (later Harrison) plays the role of a “Lady Justice” – the woman who is blindfolded wearing a toga holding the scales of justice. The video was shot in an actual courtroom in Los Angeles on a Sunday. Drummer Jim Keltner played the role of a judge while keeping time with his gavel.

This song was Harrison’s cheesy and humorous send-up of the plagiarism court case. “This Song” is often overlooked or maybe forgotten, considering it’s one of George’s best.

The video feature Mark Metcalf, playing as a father. Before the song starts, Metcalf comes into the kid’s room and belittle his kid, ending his trade by asking the famous phrase, “what are you want to do with your life”? (answer: “I wanna rock!”).

In 1985, the Parents Music Resource Center (PMRC), led by Tipper Gore and the wives of other political insiders, was the one responsible to get the warning labels attached to albums with explicit lyrics, they even included this song in their list.

Jason Preisley, Frank Zappa, John Denver, and Mr. Dee Snider himself testified in opposition going toe to toe with Congress over the content in the lyrics of music.

This song was a kick-butt anthem for anyone who’s ever wanted to fight the powers of rock n’ roll.

This song tackles views on formal education. Another Brick In The Wall and the whole lot of them on the same album are great songs.

In the music video, you can see the education system corrupts students mind, filling their head with lies, and in what to think and in what to believe. Very meaningful song by ruling out against the kind of education that forces children to lose themselves and their individuality, building a wall wrap around themselves. The video and the song really have a deeper meaning thus making it a work of art.

We somehow experienced this once in our lifetime, back to a time when school was just like this. How we were being brainwashed and processed in some kind of sort of a machine.

3. “Money for Nothing” – Dire Straits

One of the most important music videos of the decade. MTV even played it multiple times almost like it was a commercial. The video though is mostly a performance video with various effects and one of the first music video to feature computer-generated animation.

This song talks about being a rock star and the easy life it brings compared with a real job. It was written Mark Knopfler after overhearing a conversation between delivery men in a New York department store, complaining about their jobs while watching MTV.

We all have extremely fond memories watching this on MTV. Known perhaps for its memorable, animated video, attitude, humor, and self-deprecation.

One of the most expensive music videos ever made and you can’t just exclude it from any list of greatest music videos of all time.

Multiple setting, a dramatic and tragic story, flamboyant dresses and costumes, and most importantly, the sweeping footage of Slash’s solo, and the most iconic shot of Slash playing atop at Axl’s piano. Everything about it is breathtaking. A beautiful music video for Axl’s opus and was worth every penny when they did it.

Bohemian Rhapsody music video is the very tipping point of the pre-MTV era of music videos. The story behind it turned into music business lore.

This song ruled the UK charts for months. And, for the first time, the video was the definition of public memory of the song. MTV was just over 10 years old during those time. The length of the video is lengthy 6:07 minutes long, at the time, was very long. However, It did a lot better than expected.

When we think about influential music videos, Queen’s Bohemian Rhapsody is the true definition.