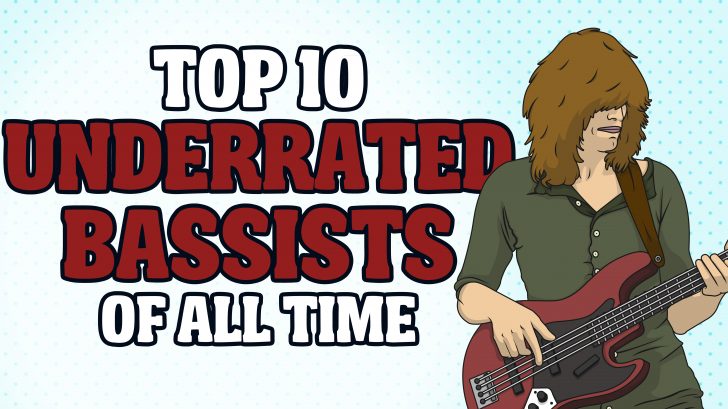 Here we are again with a list guaranteed to start another endless round of debate. So anyway, bassists are already the most underrated member of every band – it’s always about the frontman or the guitarist or the drummer. But in the world of bass, the following musicians have displayed exemplary mind-blowing skills but they still don’t get the credit they deserve.

You may recognize some of them and think “Why are they considered underrated when everyone knows who they are?” Well that may be the case but the fact is, they still get overlooked. So let’s go over this list and basically hope they get the same love as their other bandmates.

Cliff Williams is a solid bassist and during his stint with AC/DC, he was a real bad ass. His playing is practically off-the-charts and he’s one of those musicians you just have to listen to live. He sounds great on record, that’s a given, but watching him do his thing in person is simply quite a surreal experience.

With a career spanning five decades, he was content to stay in the background. He wasn’t flashy and didn’t try to steal the spotlight. Besides, he had enough control to hold back when the song requires it.

“I couldn’t have asked for anything more—being with the people I’m with, and have been, being in this situation with this band, playing this music.” – Cliff Williams

He’s had massive contributions to the band but we still think he didn’t get the recognition that he deserves. He’s now retired but we guess we’ll never know, he might miss hitting the road again.

You have to be tone deaf to not appreciate Tina Weymouth. She knows how to groove and she gave the band the ‘funk’ that they needed. Also, here’s the thing – while she goes about her business (you know, displaying her insane chops), she dances while she’s at it.

Yep, this lady’s pinky finger has more musicality than most bands we know today.

“The drums always lead. The drums work the band. A bass player follows the drummer – always. It doesn’t matter what band you’re in. You can’t do it any other way.” – Tina Weymouth

In an industry dominated by men, Tina Weymouth was proof that she can be a ‘girl’ and still secure a spot in the rock ‘n roll pantheon. From the versatility to her electrifying style, she knows how to put on a good show. The moment we heard her play, we knew she was far from your average bassist.

8. Tim Commerford (Rage Against The Machine)

Okay so most people remember Tim Commerford as the guy who climbed the stage’s scaffolding during the MTV Video Music Awards in 2000 to protest Limp Bizkit’s win for Best Rock Video. While we understand his sentiments, it was still unnecessary which is why he was arrested and he ended up spending the night in jail.

Yes, it’s pretty sad that most people associate him with that incident rather than acknowledge that he’s one of the most criminally underrated bassists of all time.

“We’re definitely not in the same spot now; there’s not a lot going on in the world of rock, and that’s a shame. I credit that to the computer. There’s a lot of computer rock happening right now.” – Tim Commerford

He’s a real beast when you see him play live – aggressive, unapologetic and just all-out. His riffs are monstrous and meaty and he knows when to pull back, which isn’t always easy when it comes to heavy metal.

Colin Greenwood’s bass lines took Radiohead songs to another level. He’s neither flashy not excessively grand. He’s just there, in the background, and barely noticeable. It’s even relatively easy to take his presence for granted and it’s easier still to forget he’s there at all.

But when you try to take apart the song, it will not sound the same without his playing like there’s something significant that’s missing.

“Playing live removes a lot of the second guessing of being in a studio – you have to commit yourself in the moment and have no time to endlessly revise… Stages can have the best acoustics to try out new songs at soundchecks.” – Colin Greenwood

His approach is minimalistic and he’s a solid bassist. He’s probably the unsung hero of Radiohead but while he easily gets drowned by his fellow bandmates, it’s undeniable that he’s the one who sets the mood for their tunes.

Part of the reason why these bassists still don’t get enough credit and recognition is because they’re sandwiched between larger-than-life personalities in their band. Take Geezer Butler for example. He has the crazy and egoistic Ozzy Osbourne on one side who doesn’t mind going overboard as long as the spotlight remains on him and on the other side, there’s Tony Iommi who is one of the greatest guitarists in metal.

At his prime, he was untouchable. And Black Sabbath’s music will not sound the same without him.

“If heavy metal bands had big pictures of Jesus it wouldn’t have the same impact. When you’re a teenager or in your early twenties you like to mess about with the darker things in life.” – Geezer Butler

If you’ve seen him live, you’ll definitely agree that he should be up there among the greatest. He’s often overlooked but without him, Black Sabbath wouldn’t be Black Sabbath. Enough said.

Alright, alright. Before you throw stuff at your screen, hear us out first. Paul McCartney gets enough recognition as a songwriter, singer and most of all, an artist. He’s a rock god and a living legend. However, as a bass player, he remains underrated.

He’s an innovative and solid bassist and his bass lines were not only melodic but they seemed effortless enough to make you want to learn how to play them.

His bass lines are the work of a genius and it was one of his major contributions to The Beatles – something which propelled them to the top and took their songs to a whole new level. As a bassist, Paul knew how to stand out.

John Paul Jones shows us how the bass should be played. And the man may be more than fine being in the background of some of the most talented musicians to ever walk the earth but Led Zeppelin’s epic masterpieces won’t be the same without his bass lines.

His bandmates are all extra flashy so of course, he’d be the least noticeable. His licks are amazing but he is just as well-versed in other musical instruments too.

“It was always like that. You need to be that close. There’s a lot going on, a lot to concentrate on and focus on. Plus, I like to feel the wind from the bass drum.” – John Paul Jones

All people talk about when someone mentions Led Zeppelin is Robert Plant, John Bonham and Jimmy Page. They always get the credit. But JPJ is often overlooked even if he’s practically the backbone of the group.

It’s pretty sad that even though James Jamerson has played in so many Motown Records hits, he remains underappreciated. Then again, he was uncredited for most of those tracks. We bet you already heard him play at least once even if you weren’t aware it was him all along.

From Marvin Gaye’s “What’s Going On” and Stevie Wonder’s “For Once In My Life” to Diana Ross’ “Love Child,” he’s a giant in the bass world.

“The biggest influence on my bass playing was James Jamerson, who played on many of my favourite Motown releases.” – Paul McCartney

Yep, he remains influential. Also, whoever your favorite bassist is, chances are James Jamerson influenced him too. He was THE ultimate bass player but is often left out on ‘greatest bassist’ lists and we have no idea why. He’s innovative and his bass lines are melodic. Most of the bass players today owe a huge debt to him.

He’s versatile and well-rounded – name it, he can play it. He’s a monster bassist that it almost feels unreal watching him. He’s innovative, imaginative and articulate. Some may find his technique and style a bit scary and intimidating but that’s just how he is.

Sadly though, he’s often booted out of ‘best bassist’ lists which is just unfortunate. The man’s a virtuoso and that’s pretty obvious with how he can transcend genres.

“There’s something with this music thing and the chemistry of the people on the stage where it’s inexplicable, but it’s so darn special. It’s part of why I do this! I love being part of that special thing that might happen and celebrating that! It’s worth doing!” – Tony Levin

Aside from coming up with ‘funk fingers,’ he also pioneered the Chapman Stick. There is simply no one like him but even after all his contributions, he remains underappreciated.

The fact that he could keep up with Freddie Mercury is an accomplishment all on its own. If you’re going to judge him, take into consideration his most popular riff – “Another One Bites The Dust.” He’s also a multi-instrumentalist but he just does his job quietly.

Then again, we did mention earlier that bassists are the most underappreciated members of every band so there’s that.

“If I’d just been a bass player all my life with the band, I wouldn’t be as satisfied as I am because I only consider that as part of what I do.” – John Deacon

He’s the glue that kept Queen together but he didn’t even attempt to steal the spotlight. Of course it’s a given that Freddie Mercury always took their performances to another level. But John Deacon, he played the bass perfectly. We have so much respect for him. And he definitely deserves more love!