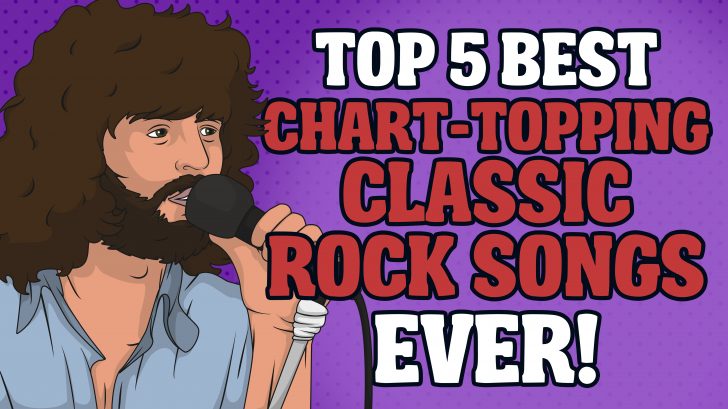 Best of The Best

There is no surer way to start an argument with someone than to tell them what you think is the greatest rock song of all time. But for this list, we’re only including those which broke the Top 20 of the US Billboard Hot 100 or similar lists and even better, tracks which topped the charts not just in the US but in other countries as well.

With that criteria in mind, it’s easier to narrow it down to five. And trust us, it’s not easy booting out some of our most favorite songs. And you may think these are all overplayed, well, that’s the point right? They wouldn’t really make it to the charts if they didn’t appeal to mainstream audience.

They don’t make music like this anymore which is probably why even today, it gets overplayed a lot and still remains a staple in classic rock radio stations. It was a massive hit and it topped both the US Billboard Hot 100 and Canada Top Singles while it peaked at #8 in the UK. It also broke into the Top 10 of several countries including France, Germany, New Zealand, Norway, Switzerland, and the Netherlands.

Only three months after it was released, it received gold certification status from the RIAA.

“Lyrically, the song deals with traditional or classical themes of conflict: darkness and light, good and evil, youth and age, the spiritual versus the secular. I guess you could say it’s a song about loss of innocence.” – Don Henley

From the rhythm and melody to the epic solo – it’s hard not to like this song. It is edgy and it made you want to learn how to play the guitar. It’s simply unforgettable – the live version will send chills down your spine!

It has one of the greatest and catchiest riffs ever. It peaked at #4 on the US Billboard Hot 100 and #2 on the Canada RPM Singles. It even managed to crack the Top 20 in Austria, South Africa and the Netherlands.

More than that, it’s a favorite among those who are beginners at playing the guitar. It’s relatively easy to learn, to be honest. Besides, you only need to hear the intro for you to get hooked.

“Ian Paice (Deep Purple drummer) and I often used to jam, just the two of us. It was a natural riff to play at the time. It was the first thing that came into my head during that jam.” – Ritchie Blackmore on how he came up with the riff

Only a genius could write something so simple yet brilliant. It’s heavy and it rocks hard. Of course it goes without saying that it basically secured Deep Purple’s spot in the rock ‘n roll pantheon.

To everyone who’s saying this is way overrated, think about it: there’s no other song like it before it was released and more likely, no one’s ever going to come up with anything remotely similar in the decades to come. In short, it’s one-of-a-kind. Yes, maybe it’s been overplayed but the fact remains that Queen’s epic masterpiece deserved every single credit it got.

It may have only peaked at #9 on the US Billboard Hot 100 but it topped the charts in UK, Australia, Belgium, Canada, New Zealand and the Netherlands. And it’s still one of Queen’s most enduring hits.

“It’s one of those songs which has such a fantasy feel about it. I think people should just listen to it, think about it, and then make up their own minds as to what it says to them…” –Freddie Mercury

This is classic rock at its finest. It pushed the boundaries and Freddie Mercury did what no one has done before. Even after all these years, it remains an outstanding piece of music.

Led Zeppelin has several other mind-blowing tracks but “Stairway to Heaven” takes the cake easily. It’s hauntingly beautiful and magnificent. It’s a rock anthem that’s difficult not to like.

“[“Stairway to Heaven”] …crystallized the essence of the band. It had everything there and showed the band at its best… as a band, as a unit. Not talking about solos or anything, it had everything there. We were careful never to release it as a single. It was a milestone for us. Every musician wants to do something of lasting quality, something which will hold up for a long time and I guess we did it with “Stairway”.” – Jimmy Page

Every rock band wants to create a song as timeless as this. There are some controversies, sure, but none of it can take away its greatness. It’s the ultimate rock ‘n roll song.

Where do we even begin with this epic masterpiece? The Beatles had a rich catalog of excellent songs but this one without a doubt, is simply on another level. It topped the charts not just in the US Billboard Hot 100 but also in the UK and other countries like Australia, Germany, France, Japan, Norway, Sweden and Switzerland.

And if that’s not enough, it was certified 4x platinum by the RIAA.

“I started with the idea “Hey Jules,” which was Julian, don’t make it bad, take a sad song and make it better. Hey, try and deal with this terrible thing. I knew it was not going to be easy for him. I always feel sorry for kids in divorces..” – Paul McCartney

It’s revolutionary and melodic. But somehow, it’s uplifting too. You can’t find any fault in this song. And it’s only one of the hundreds of reasons why The Fab Four remains as the greatest rock ‘n roll band of all time.