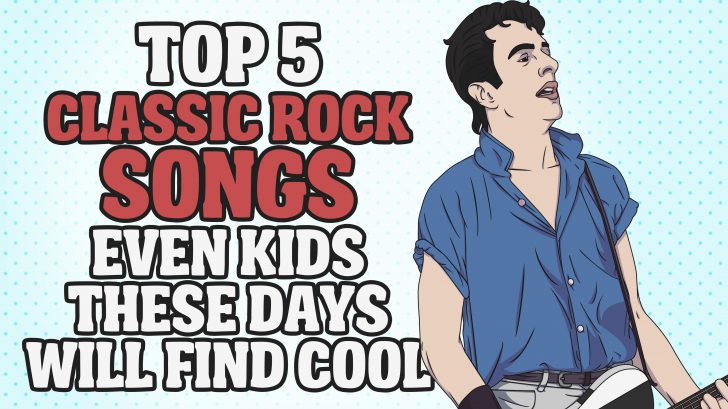 Isn’t it heartbreaking to hear kids these days say that rock music does nothing for them? With the kind of pop/techno/synthetic shallow music being proliferated today to cater to the young ones, you just long for the days of quality music and a good solid rock song on the mainstream radio. Good thing, many classic rock songs stand the test of time and might find the interest of the kids today. It’s high time the youth appreciate the timeless classic rock songs that dig deep into nostalgia yet surface to the needs of the younger generation. Just as it was said in the classic Rolling Stones song, “it’s only rock n’ roll, but I like it” and kids will like it too!

The Clash’s hit track “Should I Stay or Should I Go?”, though proven timeless, revived its relevance and modern ‘coolness’ because of the massive hit sci-fi thriller Netflix series “Stranger Things”. The track itself was used as a driver for the plot in the show’s widely successful first season. The show, set in the early 1980s, also provided a sort of nostalgia to the great era of classic rock. The use of the track is also historically accurate as well, with The Clash releasing their fifth studio album Combat Rock, including “Should I Stay or Should I Go”. Now, kids these days are all about The Clash. And that’s a good thing!

When can The Beatles ever be not cool?  Never! There’s no need for an explanation why The Beatles remain timeless and relevant through the decades, and even until today, kids are discovering them and are enamored by their familiar and wonderful music. That includes “Hey Jude”, one of the band’s most popular ballads. “Hey Jude” was inspired by pop journalist Judith Simmons (who has recently passed away at the age of 93). Simmons became friends with the band at the height of Beatlemania in the 1960s. It’s an easy-listen, light ballad, with a chorus that breaks into ‘na na na na’, something that unites different generations in a sing-along.

This legendary song is a no-brainer, and will always be considered an amazing song of epic proportions. A favorite track across generations, Led Zeppelin’s “Kashmir” is one of the most recognizable songs from the legendary band. Just listening to the ascending riff and Robert Plant’s tremendous vocals will give you chills. “Kashmir” isn’t just cool cause it’s rock and roll, it defines what a great rock song is all about. All the incredible talents of the band members are showcased in this song and reminds you that this is the kind of music every era should have.

“Iron Man” has now become synonymous to arguably the coolest of all the Avengers. With the epically massive hit superheroes movies from the Marvel Cinematic Universe trailblazing the future of films starting from the late 2000s’ until today, “Iron Man” certainly found a new audience and we’re not just talking the superhero here. The song “Iron Man” by Black Sabbath is STILL considered one of the coolest songs in the modern era. With that intro riff as recognizable as the song itself, it was used for the Marvel superhero movie of the same name, though the story behind the song is not at all connected to the story of the superhero. Nevertheless, it’s worthy of note to know that Tony Stark baptized his indestructable suit of armor, “Iron Man” because the Black Sabbath track of the same name is his favorite song. And if Tony Stark thinks the song is cool, then the song is cool.

1. “Born To Be Wild” by Steppenwolf

Steppenwolf’s most popular hit to date (and to chart) is the ultimate road trip song since its release in 1968. It’s been 40 years since “Born to be Wild” debuted and it still sounds as cool today as it did back then. In fact, this song is so kickass that it literally defined the genre of heavy metal. The line “heavy-metal thunder” from the lyrics birthed to a new genre. There’s also a belief that this was the first ever heavy metal song ever released. With all the hype on traveling nowadays, this song is definitely a must-have on any travel playlist. The head-banging song remains widely used in pop culture throughout entertainment history even to this day.

Steppenwolf frontman couldn’t have said it better himself,

“Every generation thinks they’re born to be wild and they can identify with that song as their anthem.”

More than a group of people, this song defines a whole era. The 1980s sound is the only definition of pop that your father will agree with because the dawn of electronic pop happened with songs like these. Apart from this, the revolutionary video that involved many hand-drawn sketches just adds to the old school charm of this number.

The nostalgia quotient is high and we hope you and your father can groove to these tracks together, this Father’s Day!