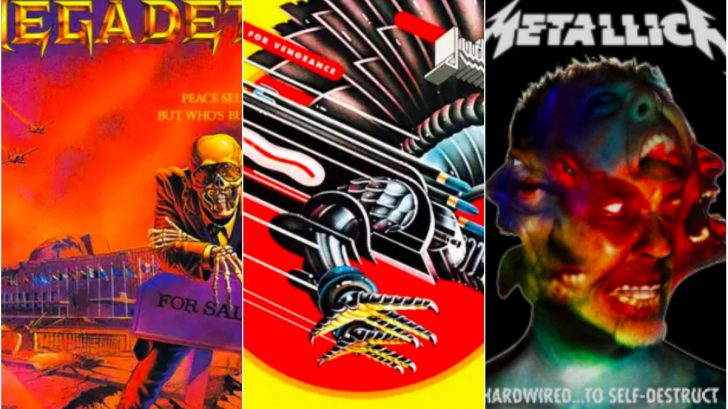 Even though sometimes it seems like mainstream radio is being dominated by pop music and as pop music seem to be taking over the charts and record sales, it’s actually good to take a better look at what really sells to what audience. In the case of metal rock, it may be surprising to find out that millions and millions of fans support and contribute to the sales of metal albums.

The RIAA has proof of the best-selling metal albums of all time and these top 5 that has earned at least a Diamond certification (10x Platinum, or 10 million copies shipped). In the digital era of music, reaching this achievement is already a rare feat.

Here are the Top 5 Highest Selling Metal Albums Of All Time:

Motley Crue’s fifth studio album was released on September 1, 1989 and rose to the top of the Billboard 200 charts right away. Dr. Feel Good  was the first album the band recorded after going into rehab and seeking sobriety in 1989. Nikki Sixx was declared dead after an overdose in 1987 but survived. After that incident, they all sought for a cleaner, sober life. Dr. Feel Good became the band’s best studio album as widely recognized by fans and critics alike. The metal album has sold more than 6 million copies in the U.S., and was certified Gold in the U.K. also. Even the members of the band regard this record as their best one yet, as inspired by their collective determination to go sober.

The first out of the next four of Metallica’s top selling albums, Ride the Lightning, which was released on July 27, 1984 by Megaforce Records, has been certified 6x Platinum by the RIAA. The record has sold over 6 million copies in the U.S. alone.

This sophomore effort surely wasn’t a slump. However,  “Ride the Lightning” is the last Metallica album to credit former lead guitarist Dave Mustaine with co-writing their songs. In 1983, Dave Mustaine got fired from Metallica, just before the recording of Kill ‘Em All. Ride The Lightning was also the first album where his replacement, lead guitarist Kirk Hammet garnered songwriting credits,

Released on March 3, 1986, Master of Puppets is now considered by the music industry and Metallica fans as a classic thrash metal album, one of the greatest heavy metal albums of all time. And proof of that accolade and praise are its achievements of gaining the band’s first certified Gold record for sales, having sold over 500,000 copies without any radio play and without releasing a single or even a music video! It reached #29 on the Billboard 200 album chart and was released to positive critical response. Master of Puppets was certified 6x Platinum by the RIAA, having sold over 6 million copies world wide.

2.  Metallica – And Justice For All

..And Justice for All , released on August 25, 1988 by Elektra Records, can be considered as Metallica’s most politically charged album yet. It tackled many political-related themes such as corruption, blacklisting, and censorship. …And Justice For All  was the first album to feature bassist Jason Newstedand the last to feature a songwriting credit by late bassist Cliff Burton.

This album can be considered as Metallica’s best-selling album upon its released and it spawned four released singles. These songs are “Eye of the Beholder”, “Harvester of Sorrow”, “…And Justice For All”, and “One”. The album reached No. 6 on the Billboard 200 charts, it is also is the most abrasive-sounding album to sell over eight million copies ever. The album was also nominated for a Grammy Award for Best Hard Rock/Metal Performance in 1989, but lost to Jethro Tull’s Crest of a Knave.

Metallica’s self-titled 1991 release is already their fifth studio album and yet it has reached over 38 million copies sold. Relased in 1991, The Black Album was received with much praise. From the album came about five solid hit singles: “Enter Sandman”, “The Unforgiven”, “Nothing Else Matters”, “Whereever I May Roam”. The album is now ranked 252 on  Rolling Stone’s list of The 500 Greatest Albums of All Time. The album debuted at number one in ten countries and spent four consecutive weeks at the top spot of the Billboard 200. Metallica is the band’s first album to top album charts and the group’s best-selling album. The album was certified 15× platinum (diamond) by the RIAA on November 13, 2009.