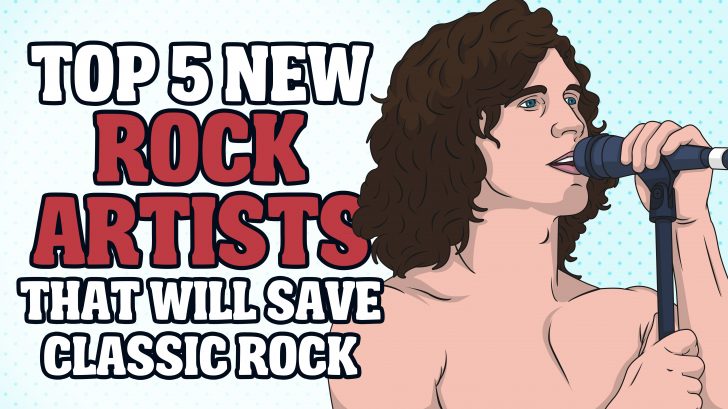 As of now, Rock Music isn’t the center of the universe. But it is set to have its comeback in the forefront again, and don’t you dare say that it won’t. It will happen! And it will be saved! In this list, you will see a list of bands that are qualified to push this generation into a new age rock n’ roll. They are the best thing in rock music right now, and they have the heart and soul to produce the sound that classic rock fans have been longing. We all need this, and the fact that our favorite classic rock artists are either slowly passing away or retiring. We need a new set of new rock artists that will continue the legacy of Rock N’ Roll. Rock N’ Roll will never die, and they are the reason. Check them all out, and comment down below what you think about them.

Mixing a powerful blend of progressive rock, heavy metal, and radio-ready alternative rock. “Nothing More” invokes names such as System of a Down, Incubus, and Killswitch Engage.

Formed in 2003, Nothing More is an American Rock band from San Antonio, Texas, United States. They spent most of their career recording independent albums and struggling to attract record label interest. In September 2017, they released their fifth studio album (second on a major record label) The Stories We Tell Ourselves. The lead single, “Go To War” is their “creme de la crop” of their career, topping the Mainstream Rock chart, and the release earned the band three Grammy Award nominations; Best Rock Album for the album, and Best Rock Song and Best Rock Performance for “Go to War.” Nothing More were the only band to ever achieved such nominations, something that Foo Fighters and Metallica couldn’t accomplish. This is something we have all been waiting for, the guts to save Classic Rock (in a modern way style).

You can tell the influence that AC/DC had on their music. And it’s pretty hard to ignore that kind of comparisons between them and AC/DC. And if you love AD/DC and you somehow realized that they are done for good. Well, here’s the good news, a band (also from Australia) that is still in the prime of their career: AIRBOURNE.

They appeared at the perfect time to show up that they also have the guts to save rock n’ roll. They will definitely go to rock our world out! This hard rocking band was formed in Warrnambool in 2003. And in September 2016, the band released their new album titled Breakin’ Outta Hell, an album that fulfills the same path that AC/DC have taken.

Ever wondered what would it sound like if you mix something like Soundgarden and Led Zeppelin into one band? Here’s the answer, a power trio, RavenEye. An English rock band formed in Milton Keynes in 2014. Their sound is rooted in grunge rock and blues rock.

In September 2016, the band released their first full-length album Nova with Frontiers Records, who they signed with in July 2016.  They are one of the best we’ve heard so far, and they are one of the most exciting things to ever happen in rock history. Having your high hopes yet? Rock N’ Roll will top the scene once again in the near future! Thanks to these guys. You should also check out their songs, they are monstrously well-produced and well-written!

It’s been awhile since we’ve heard something like this. A band that won the Highway To Hell UK battle of the bands’ competition, appearing at Ramblin’ Man Fair, Hard Rock Hell and supporting Inglorious. – Seems like they’re pretty hot right now, and very much in demand.

Mason HIll’s music sounded like that “Classic Rock had sex with Modern Hard Rock” that resulting in uncompromising riffs, awesome solos, and an anthemic chorus that will make audiences to sing along with them, and they also had some pretty powerful ballads. In their live performances, they display the kind of swagger and confidence that classic rock fans surely love. In December 2015, the band released their debut E.P, the self-titled ‘Mason Hill,’ featuring four tracks that a lot of people turned their heads on them. Mason Hill’s debut will set to arrive later this year. Just a few more steps and we’re all set in the New Age Rock N’ Roll!

Here we are! At the top of this list! Ladies and gentlemen, I present to you “Greta Van Fleet.” The chosen ones! The one that will surely save CLASSIC ROCK! -The Resurgence of Rock! Yeah, it’s about damn time to have real music in the shitty world we lived in today. Inspired and influenced by the golden age rock n’ roll legends, the Led Zeppelin. Every song on their sleeves will put you into nostalgia, like “whoa, are they really from this generation?” -You’re goddamn right they are.

Greta Van Fleet was formed in 2012 consisting of four members. Josh Kiska (Vocalist) and Jake Kiska (Lead Guitar) are twin brothers, Sam Kiszka (Bass/Pianist) their youngest brother, and the other member is a family friend named Danny Wagner (Drummer). The band released their debut EP, Black Smoke Rising, and the debut single, Highway Tune that topped the Billboard US Mainstream Rock in September 2017. They also have a second release, the double EP “From the Fires,” containing four songs from Black Smoke Rising and other four new songs. The double EP was released on November 10, 2017.

Seeping with classic rock influenced that will surely catch your attention, the Songs, the Talents, and the freaking frontman’s Voice are something to watch out for, and surely they’ve got the Looks to become a pretty badass Rockstar that will set to become LEGENDS in the future.