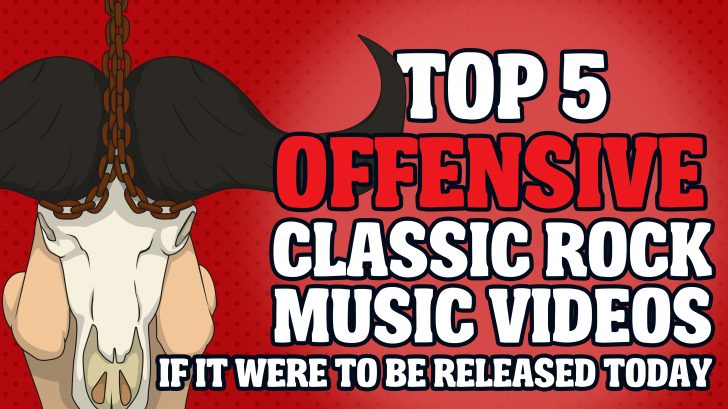 Offensive then and will still be offensive now if it were to be released today. Everything about these songs is controversial in their own way. It’s not just the lyrics but the music videos get people to be pissed off. The very nature of these videos are ridiculous, they promote an idea that will get people in trouble. Some will find them amusing, cool and awesome and some will find them troubling, confusing, and offensive. Most of these are seriously disturbing and contains upsetting imagery. But for one thing, we never knew the very idea of why these videos were as they were, except for one. This is why people considered rock music as satanic or something like that.

The sexual nature of the music video of this song is somewhat offensive for women who are teachers in the profession. As a student, this will get you in trouble in no time. The song is definitely offensive for pimping and scoring with your teacher. It promotes sexual arousal for teachers.

Though musically speaking, this song is definitely amusing and amazing. The guitar solo of Eddie Van Halen is definitely one of the iconic moments he ever did. Overall, the music is great, the video is hot but very offensive in any way for teachers.

The most sexually explicit video in the history of music. When it was first released in October 1983 it was a big hit topping the charts, then it was banned by the BBC from being played on televisions and radio stations in 1984.

You see a fat guy dressed as a Roman Emperor giving homosexual people a golden show at a nightclub. The song, for the most part, is about sex (both heterosexual and homosexual).

It is way too offensive for homosexuality, it refers to the danger of homosexual sex and the AIDS epidemic they give, it tells you about being careful not to get the illness.

NOT FOR THE FAINT-HEARTED!

A song that has been one of the most popular rock songs in two decades. The band definitely did a great job offending religious people in this video.  Showing a monkey being crucified on a crossed is very blasphemous. Not only did they offend religious community, they have probably offended PETA too, as you can see the monkey looked pretty exhausted being tied up on a cross. The video is definitely disturbing, it doesn’t make any sense and creepy even if it were released today. It doesn’t even look like an art in any form. Well, I guess that was Nine Inch Nails was aiming for…

NO! Not That One!

Corrupting religious imagery by making a music video is the best way to offend people. The offensiveness in this video will rattle most people at once. Showcasing a woman to be crucified like Jesus Christ is not an impressive thing to do. Way too Anti-Christian. Well, the fact that the group received a lot of death threats over it proved the point. People were not very impressed when this was released.

But I got to give it to Chris Cornell, his vocals in this song was so amazing. No one can (without a doubt) sing like him…

Dangers Of The Dark Side with this One!

Seems like that this video will offend a lot of religious people if it were released today. Christians take their religious beliefs way too seriously in which they would definitely find this video offensive, not considering the thought of rationality.

And the part dressing up a child up as a Ku Klux Klan member, a way to pissed off a large group of people.

The bothering thing about this music video is up until now we are clueless about what it really means. Presumably, it’s exactly the kind of response Cobain was aiming for…