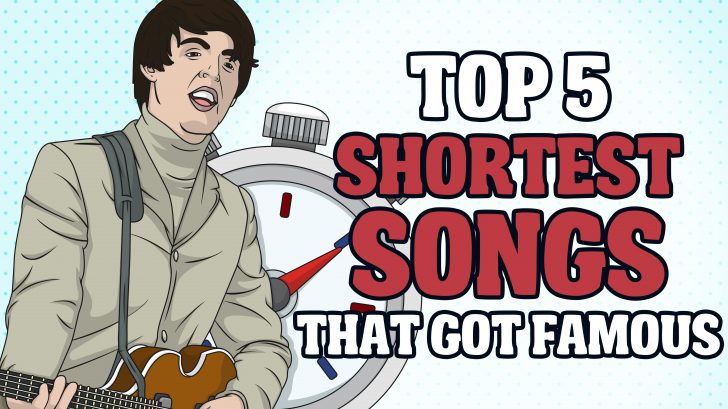 Less Than Two Minutes To Change The World

Make no mistake, these songs may be short but they pack a lot of punch. And they also prove that some musical masterpieces come in small packages. Besides, while we would prefer our favorite songs to be longer than 10 minutes, we can’t help but enjoy listening to these gems.

These all sound so good you wouldn’t know what hit you. Before you even understand what’s going on, the track’s over. But we can’t complain especially with so many crappy songs we hear on the radio today, we’d definitely like to go back to these simpler times when music barely had any rules but musicians still managed to churn out incredible tunes that remain timeless.

Janis Joplin was something else. It was her who took every song to another level. The rasp, the unbelievable depth of emotion and the soul – she knew how to pepper a tune with so much magic. And her “Mercedes Benz” is one solid proof of her greatness.

It still breaks our heart listening to this piece. And it only reinforces what we already know – there will never be another one like her.

“I’ve been looking around and I noticed something: how much you really need to be loved. Ambition isn’t just a desperate quest for positions or money. It’s just love—lots of love.” – Janis Joplin

This was recorded in one take and everything about it sends chills down our spine. How can something this short be so great? It’s raw, hauntingly beautiful and soulful – it’s rare to come across anything this magical. It’s as if she reached into your chest and grabbed your heart.

This is different from Pink Floyd’s other songs in more ways than one. It might not be as majestic as “Wish You Were Here” or “Money” but it has its own appeal. And we still think it’s criminally underrated all things considered. And let’s not forget that this is a love song – not really something we’re used to hearing from the band.

“Maybe it was about someone. My feeling now is that it’s more general. It’s saying, if we don’t care for one another and have empathy for one another, then all we’re left with is this… crap….” – Roger Waters

Critics were harsh and unforgiving with this song. But well, we don’t care though.

We like it and we think it deserves more credit – besides, we’re perfectly content with the fact that it doesn’t even reach the 2-minute mark which is quite something given that we’re used to their lengthy tracks.

The moment this song ends, we always think “Play it back” because really now, you can’t listen to this just once. That’s not how it works. Besides, it’s one of those songs that make you want to sit back, grab a cup of steaming coffee and just relax. Freddie Mercury’s songwriting chops remain unparalleled.

He can go from “Bohemian Rhapsody” to “Lazing on a Sunday Afternoon” real quick.

“That’s the way the mood takes me. You know that’s just one aspect of me, and I can really change. Everything on “Lazing on a Sunday Afternoon” is something that I’m really sort of. I love doing the vaudeville side of things. It’s quite a sort of test. I love writing things like that and I’m sure I’m going to do more than that. It’s quite a challenge.” – Freddie Mercury

Also, we can totally relate to this because who doesn’t love their Sunday afternoons? Plug this in after a crazy week and you’d be ready for Monday in no time…. or not.

This is what real music sounds like. At a little over one minute, this acapella hymn totally won us over. We feel sad for all those who think auto-tune songs deserve applause. This one is the kind that needs to be played on loop in radio stations because once upon a time, rock tracks took us to places.

It’s incredibly calming and soothing to your soul. We can’t exactly pinpoint what it is but there’s some sort of enchantment going on here.

“I was sitting at my piano thinkin’ about holy music. I poked around for some simple but moving chords. Later I sat down and wrote ‘Our Prayer’ in sections. The boys were overtaken by the arrangement. I taught it to them in sections, the way I usually do. The purity of the blending of the voices made the listeners feel spiritual. I was definitely into rock church music.” – Brian Wilson

This is the work of a musical genius. It will definitely take your breath away. And if it’s your first time hearing it, you can’t help but wonder how you ever missed out on something this great.

Clocking in at exactly 23 seconds, this is something we can listen to all day long. We would’ve preferred it if this was longer but who are we to complain? This is just way too good and besides, we can easily put it on loop because let’s be honest, stuff like this doesn’t need to end.

And the thing is, it’s still a whole lot better than 99% of today’s music.

“It was quite funny because it’s basically monarchist, with a mildly disrespectful tone, but it’s very tongue in cheek. It’s almost like a love song to the Queen.” – Paul McCartney

How can anyone not love this? It’s clever and only someone like Paul McCartney could ever come up with it. It’s genius – we just can’t stop gushing about it. It’s a fitting song to close off the masterpiece that is “Abbey Road.” We wouldn’t have it any other way.