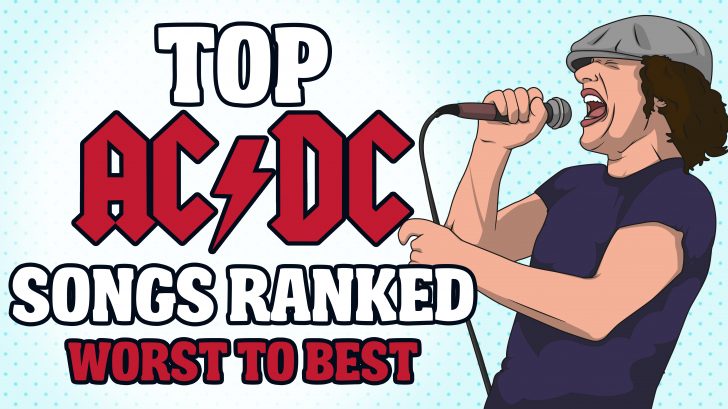 You are missing out if you haven’t heard any AC/DC’s masterpiece!

Looks like we cannot trash out anything from AC/DC because they can really rock hard as a ROCK! They defined what rock and roll is. There are so many songs to choose from this band and they’ll definitely get in to your nerves. They are catchy, they are easy to memorize, and they are the things we always want to get back on to. You should all include these songs to your playlist as they are one of the most unforgettable songs of one of the greatest band in the world. AC/DC.

Who made rock and roll great? AC/DC ladies and gents …

Released in 1986 as the soundtrack to Stephen King’s movie Maximum Overdrive. This song might want to get us all back to the 80’s. It never gets old and you can always listen to it all throughout the day and night. The tone of this song can really make you happy and can make your day positive.

It’s a shame that we never saw them play this song live. It would have been really great it they would have performed it live.

Oh well, this song is the second track on the 1980 album Back in Black. This song became also one of AC/DC’s career highlight. It can make you jumpy in a second that you might even want to wear your jumping suits on and be ready to rock the world! Every part of it is its best! Even “TONY STARK” know what real good music is!

What do you do, if your neighbors play this song out loud? Go! YOU SHOOT TO THRILL!!!!

Even people from other dimensions would love to rock on this song!

A third studio album and the band’s third LP released in Australia and Europe in 1976 but was not released in the US until 1981. We all thought that “Dirty Deeds Done Dirt Cheap” was “Dirty Jeans and the Thunder Chief”! Back when music was good, this is one of its reason.

One of the songs that has given justice to rock and roll and still bad ass up to this day! If you never heard of this song, (possibly you have) you’re missing out one of their greats…

Have you counted how many oi’s? You probably did not, cause you’re busy feeling the vibes on this song.

A song released in 1975. Taken from their album High Voltage. Tell me if this is not the most dopest intro ever! Can make you out going in no time and makes you want to blast this song out loud!

You know where the best part of this song? I’ll give you some tip, if you are listening to this song right now, you might want to skip part to 0:00-3:49. That is my favorite part…

The song that will make you rock and roll forever!

It is the first track of the group’s album T.N.T., released in December 1975. If you are an AC/DC fan and you don’t recognize this song, shame on you buddy! You are missing out a lot! It’s really a long way to the top if we want to rock n roll, but AC/DC gave this song to us to skip the long part and just rock and roll already. Only in rock will you get a song like this.

The song should become the musical anthem of ROCK AND ROLL! It’s basically the meaning of life of a rock and roller!

You have to take caution because this song is definitely high voltage!

A song first released in Australia as a single in July 1975 and the 8th track of their 2nd Australian album T.N.T… AC/DC’s music is without a doubt “TIMELESS”. If you have listened to them back then and you are listening to them now, it makes no difference. Still ROCKS!!!

And if you are a guitar player, you will notice that in this song they’ve used the guitar chords A, C, D and C… That’s really something guys. This song is considered as the bands Anthem. Mainly the reason why they used the chords in that kind of setup…

The song that has been a significant part in the history of rock and roll!

The lead single on their 1990 album The Razors Edge… We have all been Thunderstruck by this song! Indeed we did! Everything about this song is just plainly awesome and perfect… The song will hit you hard fast as a lightning!

We all wish that rock and roll will never die. You got to give this song to this generation and the next one and the next…

3. For Those About To Rock (We Salute You)

No! We salute you for giving us this song!

A song that was first released on their eight studio album For Those About to Rock We Salute You in 1981, and later as a single in 1982. Define a bad ass song! Yeah baby, it’s this one! You have to play this one at the maximum volume level as much as possible. NO to earphones! NO to headsets! It will be a crime if you’ll play this one on a low volume….

This is definitely the father of all ROCK ANTHEMS! And anyone who disliked this song are batsh*t crazy!

Highway to Hell or Stairway to heaven? We are all definitely going down anyway…

The opening track in their 1979 album Highway To Hell and was initially released as a single in 1979. A legendary song for a legendary band. We don’t need reasons to not like this song, that’s just crazy. If you listen to this song so does your neighbor. Let’s take the road and keep on rocking!

But don’t try to make this song as a phone ringtone if you are on a church, you know want I mean. People will start judging…

Who performed BACK IN BLACK? AC/DC my man!

A song appearing as the first track on side two (when cassette tapes are still a thing) of their album of the same name. The song is without a doubt known for its incredible guitar riffs! The best thing about this song is that it never gets old! Nothing can top Back In Black as the most badass song in history!

Let me give you a piece of advice while listening to this song….. Turn your speakers on full blast! No hesitation, please! Rock the world! Do as you please! Never underestimate the POWER OF BACK IN BLACK! The POWER OF ROCK AND ROLL! THANK YOU AC/DC!