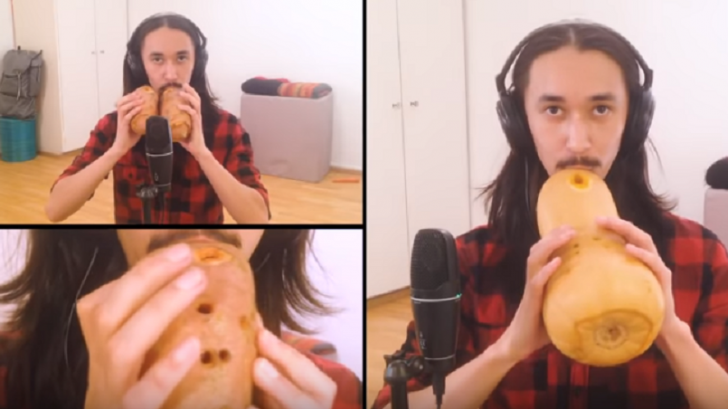 Wait Till You Hear How It Sounds

Just when you thought you’ve heard it all…

2018 was a weird time for Toto’s 1982 classic hit “Africa” since it was covered in almost every style and genre imaginable. From Weezer’s wild take (which we all surprisingly loved) to Pitbull’s cringe-worthy and unbearable rendition (which everyone probably unanimously hated), Toto definitely experienced an unexpected resurgence in popularity.

But lo and behold, before 2018 ended, someone else decided to jump on the bandwagon at the last minute. And oh boy, does it sound seriously interesting! This guy goes by the name Pupsi on YouTube and he’s a professional ocarina carver.

“Hi. I’m Toni Patanen from Finland. I make ocarinas, real ceramic ones (saunaocarina.com) and from stupid things such as potatoes. I play bass guitar as my main instrument and obviously also play the ocarina.”

Obviously, this cover is a mix of two things he loves – music and carving.

Is it possible to make music out of vegetables? Does it even sound like real music? Well, you be the judge.

The actual song starts a little later but we don’t recommend skipping out on the first part where you can see Toni hollowing out the sweet potatoes and butternut squash so he can carve holes on them. That alone is pretty mesmerizing, to be honest.

And then, comes the good part. He starts playing “Africa” and let’s just say, he really won us over with this. Who would have thought you can play music with some stuff on your fridge?

“The irony of playing “Africa” with food is incredible. To make up for it, please go help out some people after watching this video.” – Pupsi A.K.A. Toni Patanen

This isn’t his first recorded attempt at playing covers with veggies. He also has a potato cover of Darude’s “Sandstorm” and a carrot cover of Future’s “Mask-Off.”