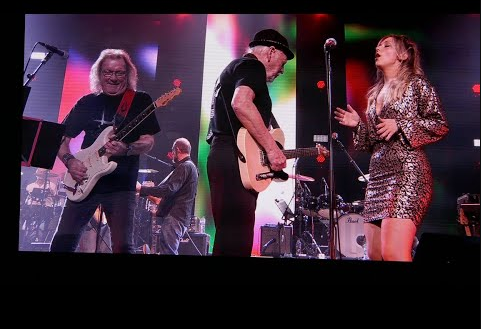 The concert for a cause featured Van Morrison and Eric Clapton jamming on “Three Chords and the Truth” and “Does Love Conquer All,” while Paul Carrack reunited with his former Mike and the Mechanics bandmate Mike Rutherford and performed “Over My Shoulder” and “I Can’t Dance.” On the other hand, Bonnie Tyler performed a nostalgic song from the Eighties with “Total Eclipse of the Heart,” and Yusuf/Cat Stevens killed it with “Wild World” and Tom Jones doing what he does best with “Delilah.”

Before the show ended, Pink Floyd drummer Nick Mason came out and played their 1979 classic “Comfortably Numb” with Brooker, Procol Harum guitarist Geoff Whitehorn and many other artists from the show.

The benefit concert marked the first time that Rutherford has played with Carrack in several years after Carrack left Mike and the Mechanics in 2004 and Rutherford carried on with new vocalists Tim Howar and Andrew Roachford.After the show ended, Rutherford along with his Genesis bandmates Phil Collins and Tony Banks to announce their first tour since 2007 on the BBC.