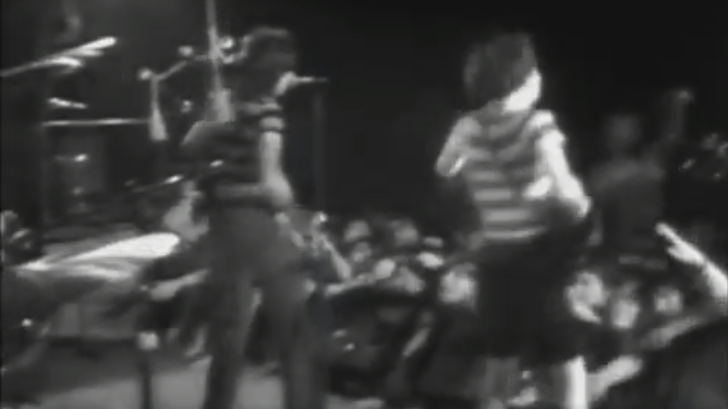 Before playing highly-energetic legendary shows in sold-out arenas around the world, and before Angus even donned the school uniform for life, a fetus AC/DC rocked one of their earliest gigs ever at a place where a uniform is actually required.

Filmed in 1976, a very young, very fresh and up-and-coming band played at a little all-girls high school in their native Victoria, Australia. The gig was set just after the release of the now-iconic rock band’s first major album High Voltage.

“At that time… we were giving punk music a good name. Because that was the word they used to describe us – punk band. They’d get the wrong idea. We weren’t punk, but they’d put us on the same bill as punk bands. And they sure got a shock when they started spitting at us and we spat back. We were never ones for getting slumped under a tag or filed under A, B, or C. We started as a rock and roll band. That’s what we play – what we do best. We never claimed to be anything else.” – Angus Young

Below, you can see some very early  footage of AC/DC crushing “It’s a Long Way to the Top (If You Wanna Rock ‘n’ Roll)” and “She’s Got Balls”. And of course, the students of St. Albans High School ate it all up.

Understandably, the quality of the video and audio is not as great as you’d usually watch in our modern era, but you can still make out the classic moves of the Angus brothers on stage. The musicality of the band is undeniable either, even 42 years ago.

Also, in case you’re wondering, Bon Scott did learn how to play the bagpipes. He had a few lessons from bagpiper Kevin Conlon.

Watch the beginnings of the legendary band’s legacy below:

WATCH: The earliest live footage of AC/DC in action. Shot in a high school in March '76, before Angus was even in uniform.