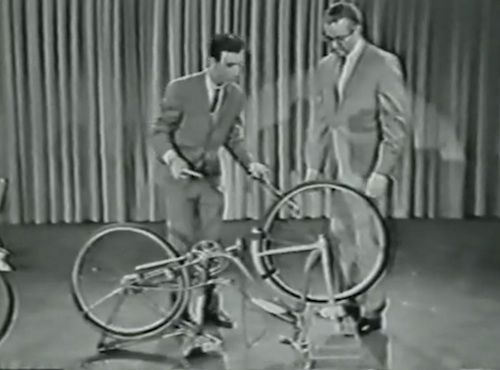 We all know what’s the use of a bicycle, and one use for a bicycle that we never really anticipated or did ever consider that there’s the possibility it can be used as a musical instrument – and perhaps if there’s anyone who can prove it that it can be easily done, it’s the legendary Frank Zappa and his experimental ways as a musician.

In the clip below from the Steve Allen Show in 1963, a 22-year-old Frank Zappa demonstrates how he can produce a sound from the bicycle. The creativity of this legend never slowed him down. He always tends to have fun with his musical experimentation and by using the bicycle here that is something that can easily have an appeal to wide range of audience. Who doesn’t even like a bicycle?

Zappa was always a one of a kind innovator. He did try to make the point here that anything can be an instrument, and one example is the bike. And one lesson that we can come up with his demonstration and it’s pretty much applicable even today; insanity may be referred to as sanity as well, as long as there’s that creativity in it.

WATCH: A 22-year-old Frank Zappa appears on 'The Steve Allen Show' in 1963, turning a push bike into a musical instrument.