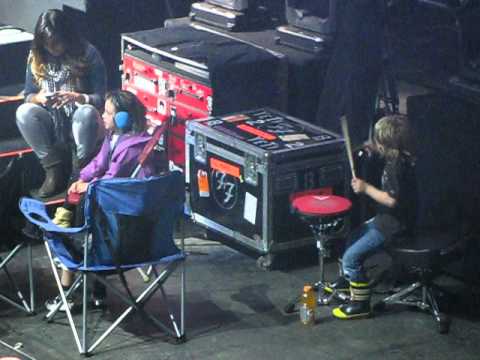 Some of the biggest names in music paid tribute to Taylor Hawkins during the Foo Fighters All-Star Tribute Concert on Saturday at London’s Wembley Stadium. However, by the end of the night, the most memorable performances came courtesy of two newcomers, despite having legendary pedigrees in rock music.

Taylor’s 16-year-old son Shane Hawkins filled in for his father during the Foo Fighters’ penultimate performance that night, a powerful rendition of “My Hero.” Young Shane hit the drums with the force of two drummers, no doubt his father playing in spirit.

Earlier in the night, Dave Chappelle shared an anecdote about meeting Shane backstage at a previous Foo Fighters concert.

Earlier in the night, Dave Chappelle shared an anecdote about meeting Shane backstage at a previous Foo Fighters concert. “I met a kid who must be 12 or 13 years old and I asked him if he skated because he was wearing skates shoes. And he said, ‘I don’t skate because I don’t want to hurt my arms. And I said, What the kind of fuck answer’s this? A simple yes or no would have sufficed. The kid said,‘I wanna be a drummer, like my father’. “In that room in Madison Square Garden, even though I had met the Foo Fighters many nights, I felt like I met them for the first time. I’ve seen Taylor be a rock star many nights but it was my first time seeing him be a dad, and what a cool fucking dad. It was the first time that Dave Grohl and I ever even mentioned the name, Kurt Cobain. It was the first time we ever even talked about our love of jazz and go-go music and Taylor’s son Shane was soaking it all in. He sat there, he asked the best questions – not about fame, always about art.”

In the video below, you will see a younger Shane Hawkins who came a long way, to the Taylor Hawkins Tribute event at Wembley Stadium in September 2022. Just ten years later, Shane got to play the large drums up front with the Foo Fighters and stunned everyone with his zeal.