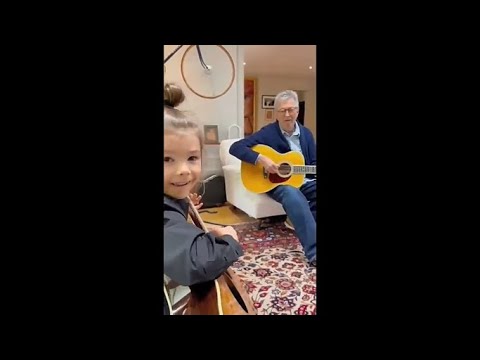 On January 16, 1992, just nine days after releasing Tears in Heaven, Eric Clapton shocked the world with his performance of what is for many his most personal and heartbreaking song. The performance took place during a private concert at the Bray Film Studios in Windsor (England), where a series of acoustic songs were recorded that would make up the album Unplugged. Released in August 1992, the album sold 26 million copies worldwide and won 3 Grammys in the 1993 edition.

And now, he gets to listen to his hit song played by a 5-year old, the young boy’s name is Leonardo Patrick. This is one of Eric Clapton’s hobbies during the lockdown, playing stream sessions with other artists and this is one of them. This is how he coped up for not being able to play again live.

Tears in heaven was the song that the British artist composed in memory of his son Conor, who died accidentally at the age of four when he fell from the 53rd floor of a Manhattan skyscraper.