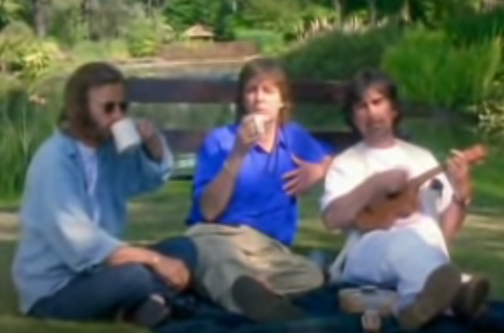 George Harrison’s former mansion located in Henley-on-Thames, England, (now owned by his widow Olivia Harrison), was the perfect setting for the reunion he had with his friends Ringo Starr and Paul McCartney in 1994. The house, known as Friar Park, was purchased by the Beatle in 1972 and resided there until his death in 2001.

Amid rock and roll classics, jams, talks, anecdotes, and memories, the then Fab Three had one of their last meetings. The conclusion could not be other than a phrase launched by Ringo at the end of the clip: “I like hanging out with you guys.”

With neo-gothic architecture, statues, and perfectly manicured gardens, Friar Park, which belonged in the last century to the famous lawyer Sir Frank Crisp, was the place chosen for an afternoon of picnic and musical tea by those who at some point formed, alongside John Lennon, the most legendary rock band of all time, The Beatles.

Watch them below as they jam the 1927 classic, “Ain’t She Sweet” by Milton Ager and Jack Yallen: