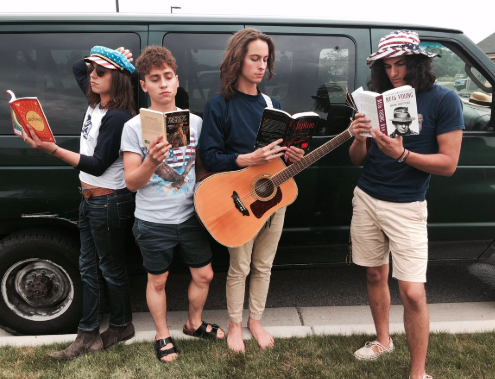 The up-and-coming rock and roll band from Frankenmuth, Michigan, Greta Van Fleet, released their catchy single “Highway Tune” and it is doing very well in the charts it made its way all the way to No. 1 on Billboard‘s Mainstream Rock Songs airplay chart. They’re also already taking the US by storm with their highly successful summer tour. With their powerful talents and skyrocketing success, it’s hard to believe how young this group actually is. Two of its members just turned 21, and the other two are just finishing up their senior year of high school yet their music conjures the spirit of the ‘60s and ‘70s and they are certainly bringing true rock music back on the map.

It seems that they just popped out of the blue just recently but this young band has been at it for quite some time now. In fact, there’s a new video of them singing their number one hit “Highway Tune” way back in 2014. Yeah, it was just around four years ago but back then the twins Josh and Jake were only 17 years old and their younger brother Sam was only 14 years old! But in this video of their live gig for Rocket Rag Magazine in Temecula, California for the Music Fest portion of the Temecula International Film and Music Fest, it is already evident how amazingly talented these boys are that they are truly blessings to the rock music community.

https://www.instagram.com/p/Bd0P9foD7YT/?hl=en&taken-by=gretavanfleet
The four-piece band’s “Highway Tune” spent more than 15 weeks on the Billboard charts, surpassing household legends in rock such as Seether, Foo Fighters, Green Day, and even Metallica!

“Highway Tune” was actually one of the first songs the band wrote, recorded, and released and it is included in their 2014 live EP. The song was recorded in just one take.

Watch one of their earliest performance of the song below: