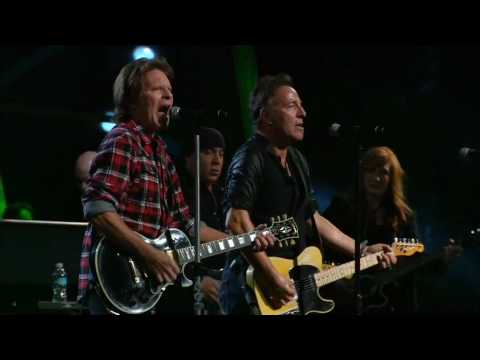 The return of John Fogerty after a decade of exile could not have been more fortunate.

Centerfield took him back to No. 1 on the American Billboard and is, in fact, the best-selling album of his career. He chose his singles perfectly: The Old Man Down The Road, a pure Creedence track (this would cause him, we’ll see, a serious problem), Rock And Roll Girls, and Centerfield the track that gave the album its name.

The Blue Ridge Rangers Rides Again (2009). Two years after Revival, at a time when Fogerty seems more proud than ever of his past, he releases a sequel to what was his first solo album. On this occasion, although he appears completely alone on the cover, he did have his usual musicians for the recording.

2009 was indeed a busy year for Fogerty, he appeared with one of the shows of Bruce Springsteen at Madison Square Garden, NYC to perform one of his classic hits, Fortunate Son. The concert was a 25th-anniversary ROCK AND ROLL HALL OF FAME celebration.

This performance is definitely the most American you’ll ever watch, keep going for the video below: