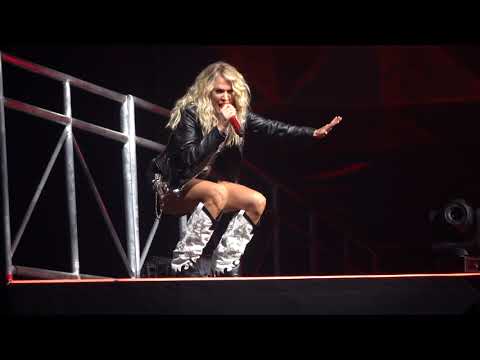 In Greenville, South Carolina, where her tour began over the weekend, Carrie Underwood played a rendition of Guns N’ Roses’ “Welcome to the Jungle” as part of her performance.

Eight new songs from her most recent album, after which the tour is titled, were the major focus of the concert on October 15. She also performed six songs from a side stage midway through the event before wrapping things up on the main stage later that night.

As the recognizable opening guitar riff from the Appetite for Destruction opener played out during the last song of the evening, Underwood emerged from beneath the stage to a black arena lighted only by red lights. The vocalist spends the following four and a half minutes controlling the stage as her backup band delivers an impeccable version to a thunderous shout from the audience. Underwood also exhibits a few of Axl Rose’s distinct gestures.

This is not the first time the popular country/pop singer has performed GN’R live. Rose accompanied Underwood live to perform “Sweet Child O’ Mine” and “Paradise City” on April 30 at Underwood’s show at the Stagecoach Festival in California. Two months later, on July 1, in London, Underwood did the same for GN’R