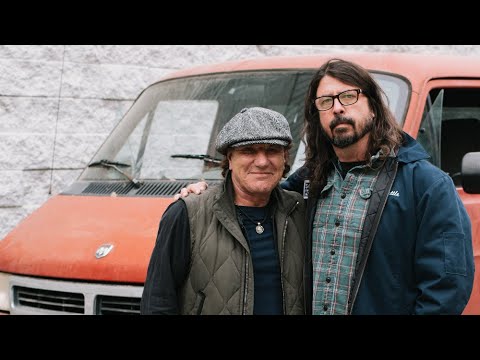 A Life on the Road with Brian Johnson is the show in which the AC / DC vocalist has the opportunity to interview different musicians. On this occasion, Johnson held an interview of more than an hour with Dave Grohl, former drummer of Nirvana and vocalist of the Foo Fighters.

The meeting between the two rock stars took place at Studio 606 (the headquarters of the Foo Fighters). The interview with Dave Grohl began with a relaxed talk about the beginnings of both in their different bands. They also talked about how difficult, but rewarding, it was to live in a van while on the road. They also talked about the love they both have for these cars despite how uncomfortable they can be.

Then both musicians enter the studio cellar, where they stop to see all the equipment (amplifiers and guitars of all kinds) that the Foo Fighters have stored and where Brian Johnson remembers a story about the first speaker system that his father bought him.

Continuing the tour, the rockers come across the band’s collection of fan art. Inside it, you can see some surfboards with images of each of the members of the group. In addition, they come across a blanket from Argentinean Foo fans and Brian mentions the passion with which fans from that country present themselves. Also, a little further inside you can see the gold records and photos of different presentations. The latter serves as a basis for Dave to remember other passages in his career.