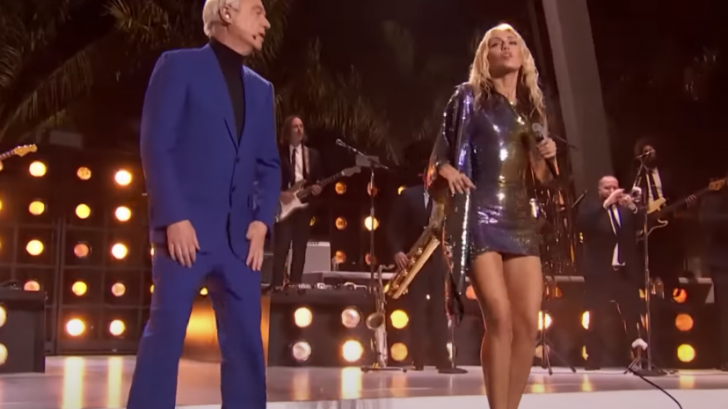 Miley Cyrus invited David Byrne of Talking Heads to perform on stage alongside her at her Miley’s New Year’s Eve Party broadcast. The group covered let’s Dance by David Bowie and “Everybody’s Coming To My House” from Byrne’s American Utopia.

During the New Year’s festivities, host Cyrus also released two previews for the recently revealed song “Flowers.” Miley’s return to the studio and the NYE party alluded to last month when “New Year New Miley” posters started popping up in the US. Later, a new countdown to the single’s release on January 13th emerged on her official website, replacing the previous one.

Fans were “highly encouraged” to “continue to follow mileycyrus.com for other announcements this week,” according to a press statement announcing the new song.

A preview of the “Flowers” music video shows Miley Cyrus strolling across a beautiful Californian countryside while singing the following line: “I can love me better, baby / Can love me better.”

Along with Dolly Parton, she also sang songs like her own “Wrecking Ball,” Parton’s “Jolene,” Joan Jett’s “I Love Rock’n’Roll,” Patsy Cline’s “Walking After Midnight,” and Whitney Houston’s “I Will Always Love You” with, Cyrus served as host of Miley’s New Year’s Eve Party.

David Byrne and Miley Cyrus collaborated on two more songs for the NBC special: a live performance of Byrne’s American Utopia hit, “Everybody’s Coming To My House,” and a version of David Bowie’s “Let’s Dance.” Later, Byrne joined Sia on stage to sing “Unstoppable,” one of her songs.

Cyrus’ inclusion on Morrissey’s delayed new album Bonfire Of Teenagers was first reported last year. The pop artist allegedly begged to be taken off the album, according to the former Smiths vocalist, who made the accusation in December. On the song “I Am Veronica,” which Morrissey had previously debuted live, Cyrus was slated to appear.