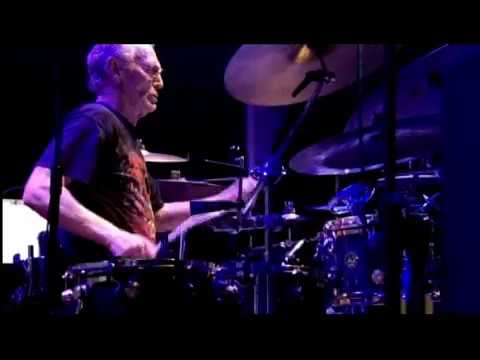 In 1971 Baker, whose style included the use of double bass drums and lengthy solos with the additive of an eccentric personality can be seen in the video below.

Like several artists who would make a career in the 1960s, the young Baker grew up listening to jazz. In particular, he was a fan of Phil Seaman, one of the great postwar English drummers, who later became his teacher and mentor.

Cream was inducted into the Rock and Roll Hall of Fame in 1993. At that time, he and Bruce and Clapton played together for the first time in 25 years. But it was Cream’s series of reunion shows at Albert Hall, London and Madison Square Gardens, New York, in 2005 that allowed this extraordinary musician to be fully appreciated.

Cream would return for a couple of concerts in two of the most important venues in the world, Madison Square Garden and Royal Albert Hall. This reunion would show something unbelievable gesture from Eric Clapton.

Clapton giving the entire stage to Ginger Baker to showcase an incredible booming drum solo! Don’t believe me? Keep going for the video below: