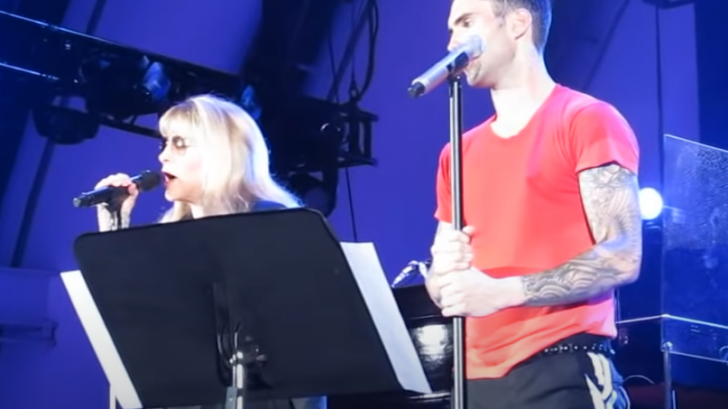 Adam Levine ensured there was no misunderstanding about his respect for the iconic Stevie Nicks during his stint as a coach on “The Voice.” As he introduced the iconic performer at Maroon 5’s Hollywood Bowl concert, his dream appeared to have finally come true.

Adam Levine made a lot of commotion about wanting to perform with Stevie Nicks after she stopped by the finale episode of The Voice (2011) to perform with the winner Javier Colon.

His wish was fulfilled on the night of July 25, 2011, at the Hollywood Bowl in Los Angeles when Nicks sang “Leather and Lace” with Adam Levine and Maroon 5, a smash from her 1981 album Bella Donna that she initially recorded as a duet with Don Henley,   Levine holds his own throughout this performance, but it’s difficult to watch this clip without thinking, “Wow, Stevie Nicks! ”

“This is one of those moments where you don’t actually realize what you’re doing until you do it,” Levine introduced the performance by saying. “What I’d like to do is sing this next song with one of my favorite artists of all-time, and I’m sure one of yours too, God do I love this woman.”

A delighted Levine concluded the show by bowing to his hero.