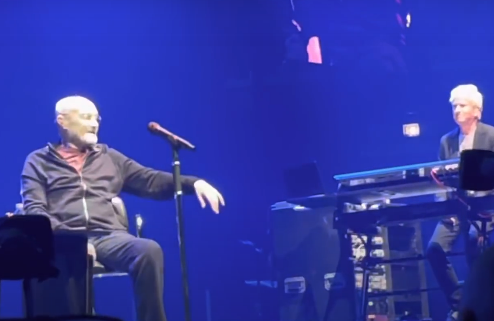 Genesis started their US “Last Domino?” tour on Monday at the Chicago’s United Center – and one of the most memorable pieces they played was their 1980 hit “Misunderstanding.”

The group had not played the song since 1984 at the Mama tour. You can watch the fan-shot video of Genesis performing the song below:

Genesis tour will continue in the coming weeks around Midwest, Canada, and the East Coast before ending it at Boston’s TD Garden on Dec. 16. They will also have a quick European tour next year that will conclude at London’s 02 Arena in Mar. 22.

During a recent interview with the USA Today, Genesis keyboardist Tony Banks revealed that it will be last stand of the band:

“We’d always say never say never, but there comes a point,” he said. “I haven’t toured myself since [the last Genesis reunion in] 2007, and thought, why not? But with the pandemic, it has extended things longer than intended, but it’s been great fun to do. We’ve having to do some stuff later because of COVID, but when we do the final show next year, that will be it.”

“It’s important to know when to stop something,” he continued. “I thought the other day, Ed Sheeran is playing four nights at Wembley Stadium [in 2022] and that’s a wonderful moment in his career. We hit that moment 35 years ago. So I’d say if you want to see Genesis, don’t put it off ‘til the next one. We’re not like the Stones.”

This news is somewhat disappointing for Genesis fans around the globe who are still in hope to watch them on this tour.