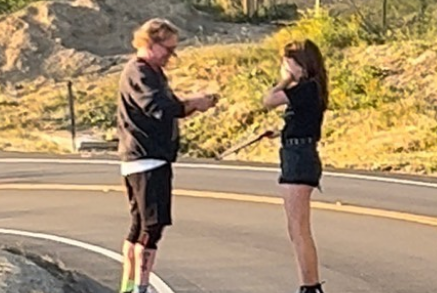 Surely we all agree that the best thing that can happen to a music fan is to cross paths with one of their idols and be able to meet them in person. Well, that’s exactly what happened to a staunch Guns N’ Roses fan named Lucie Johnson, who ran into Axl Rose in the middle of a California street a few days ago and was able to immortalize that moment.

The fan recounted the curious sequence through an Instagram post where she was able to record the moment of the encounter with the vocalist. Although Johnson did not confirm the exact place where Rose could be seen, due to the characteristics of the area that can be seen in the young woman’s post, it is believed that it could have been near the artist’s residence in Latigo Canyon, California.

As it turned out, Axl was walking to his truck when the girl approached him. From what can be seen in the photos posted by the fan, he gave her a hug and signed her Appetite for Destruction vinyl with a smile on his face.

“Can’t believe what happened tonight! Cross this off the bucket list. So… I met Axl Rose of one of my favorite bands Guns N’ Roses tonight!” Johnson wrote in the Instagram post. “We spoke briefly about music, and he gave me a hug and it all just happened so fast. Still can’t believe it. Signed my album cover. Was freakin’ awesome. I’m obsessed with them and have been working on the guitar solos and have been playing their album 24/7.”