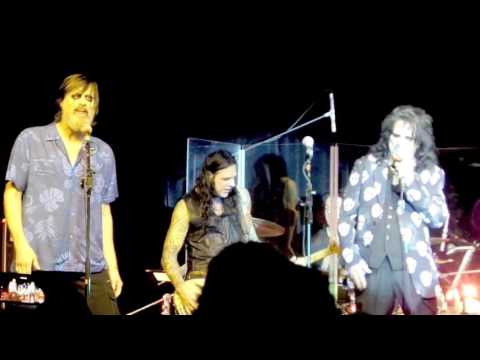 Jim Carrey, a Canadian actor, is unquestionably one of Hollywood’s most endearing, alluring, and humorous faces. His leading roles in the comedy films The Mask, The Grinch Who Stole Christmas, and Ace Ventura: Pet Detective serve as examples of this.

He has also contributed to more tragic roles in movies like The Trueman Show and A Spotless Mind. But many of his film fans are unaware that Carrey is a huge music aficionado, and in addition to doing his own unique rendition of “Creep,” he has also given his all to a few other songs.

Moviegoers adore Carrey for his impeccable comic timing and boundless enthusiasm. In interviews, on-screen, behind the scenes, and even at formal award ceremonies, the actor represents this same scenario. Carrey astonished fans with this charismatic and vivacious attitude in a variety of settings, including on stage. On New Year’s Eve 2016, the actor and glam rock icon Alice Cooper gave a surprise appearance at a benefit concert for the Maui Food Bank.

With the release of the album Love It to Death and the number-one song “I’m Eighteen,” the Alice Cooper band gained notoriety in 1971. Shock rock, hard rock, heavy metal, glam rock, and psychedelic rock are among the loud and fast-paced genres that the ever-evolving ensemble specializes in.

Carrey, who is renowned for his stunning transformations in movies, donned some Bradley Cooper-inspired makeup to really embody the heavy metal look and portray the right character. The Poison vocalist was then joined by him for a duet performance of “No More Mr. Nice Guy.”

This is a great song from Cooper’s Billion Dollar Babies album from 1973. Then the unexpected group performed the title track from Cooper’s popular 1972 album, “School’s Out.”

Another timeless rock song for listeners to appreciate was Pink Floyd’s “Another Brick in the Wall” after “School’s Out.” Along with guitarists Nita Strauss and Damon Johnson, bassist Chuck Garric, and drummer Glen Sobel, Cooper and Carey were supported by Cooper’s band.

The Doobie Brothers, Steven Tyler, Bob Seger, and Weird Al Yankovic all made additional unexpected appearances at the event.