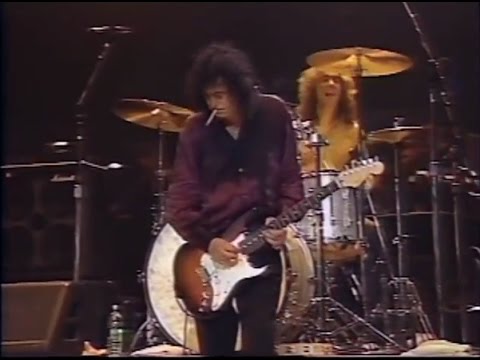 Jimmy Page is one of rock’s foremost guitarists. His legacy with Led Zeppelin made him one of the most influential and unique musicians in the business, responsible for solos like Stairway to Heaven and eccentric practices like playing his instrument with a bow.

Throughout his career with the band, he was seen with different guitar models such as a Fender Telecaster, a Danelectro, and a Gibson EDS-1275. However, perhaps the most prominent when it comes to imagining Page on stage is a Gibson Les Paul.

But you don’t see stuff such as this every day. The Stratocaster is rocking on Jimmy Page! Jimmy Page and Robert Plant’s incredible rendition of In The Evening on April 1st, 1995 in Detroit.

Who would have guessed that Page and Plant would have performed together post-Zeppelin, so even if this isn’t as fantastic as the studio version Plant’s vocals are  still11/10 godtier, and Jimmy Page’s intensity is superb, it’s a hundred percent pleasure.