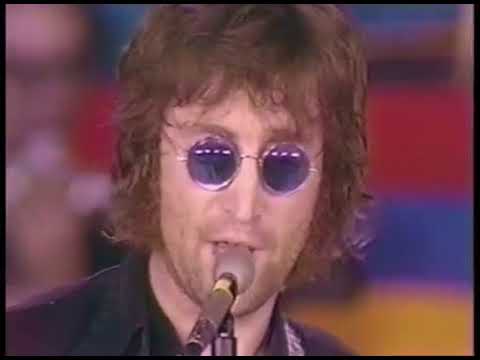 Back in the day, the Jerry Lewis Labor Day Telethon was a staple. Labor Day was usually the day on which Jerry Lewis hosted his yearly benefit for the Muscular Dystrophy Association, so you could always tell when fall was here.

In their almost 15-minute performance, the duo opened with “Imagine,” performed Yoko’s “Now or Never,” and finished with a rendition of “Give Peace a Chance” that had a reggae feel with Jerry joining them on stage.

It’s obvious that John and Yoko only agreed to take part in the event out of pure desperation. They are grinning through their teeth as they implore the American people to transform the globe. By the time Lennon and company do their dreadfully tacky reggae rendition of “Give Peace a Chance,” no one, least of all the audience, appears to be even slightly persuaded.

“This is your chance to sing even if the lights aren’t on you,” Lennon attempts to energize the crowd with his words. “We’ve made it easy for you.”

Though not simple enough. Lennon’s increasingly furious yells of “Come on, SING!” can be heard above the swaying bassline and synchronized percussion. “, followed by Yoko’s wails of “Send your money now! Then, out of nowhere, Jerry Lee Lewis, who Lennon had alluded to as his “favorite comedian,” suddenly appears on stage and plays a little flugelhorn with the uncomfortable exuberance of a guy who is hopelessly adrift at sea. What a disaster.