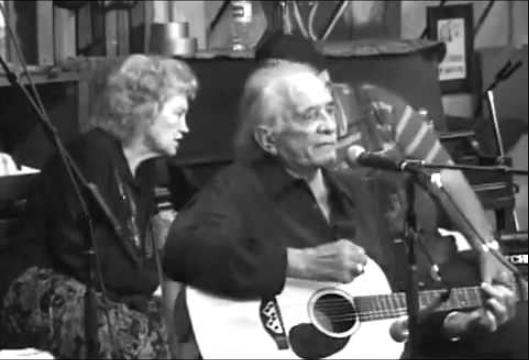 ‘Ring Of Fire’ has demonstrated magnetism and longevity. For several reasons. First, it reflects his emotional life: he talks about the forbidden attraction between Johnny and June Carter; they were both married to other people. The piece is even signed by June, who collaborated with composer Merle Kilgore.

Second: ‘Ring Of Fire’ sounds different. Johnny Cash, who used to visit Mexico, imagined dramatizing the lyrics with mariachi trumpets: in an American imagination, the music of the South of the Border equates to passion and heartbreak. It doesn’t matter if the arrangement was recreated by gringo instrumentalists, the self-styled Tennessee Trumpets.

Third, and this is the most difficult to quantify. The agonies of ‘Ring Of Fire’ have resonated throughout the decades – dozens of versions exist in every style imaginable.

It was as emotional as you would assume with Cash noting to not only his interviewer but his followers from across the generations: “You can’t let people delegate to you what you should do,” Cash says, motioning to his chest, “When it’s coming from way in here, you know? I wouldn’t let anybody influence me into thinking I was doing the wrong thing by singing about death, hell, and drugs.”

Cash and his band entertained the entranced fans to performances of ‘Folsom Prison Blues’, ‘I Walk the Line’, ‘Ring Of Fire’ and ‘Sunday Mornin’ Comin’ Down’ before giving tribute to his late wife in a time in a building of dear value to her. It’s a poignant significance of pure love and admiration. “The spirit of June Carter overshadows me tonight,” he said.

“With the love she had for me and the love I have for her, we connect somewhere between here and Heaven. She came down for a short visit tonight, I guess, from Heaven, to visit with me tonight and give me courage and inspiration, like she always has.”

Watch Johnny Cash ‘Ring of Fire’ Performance Weeks Before His Death below: