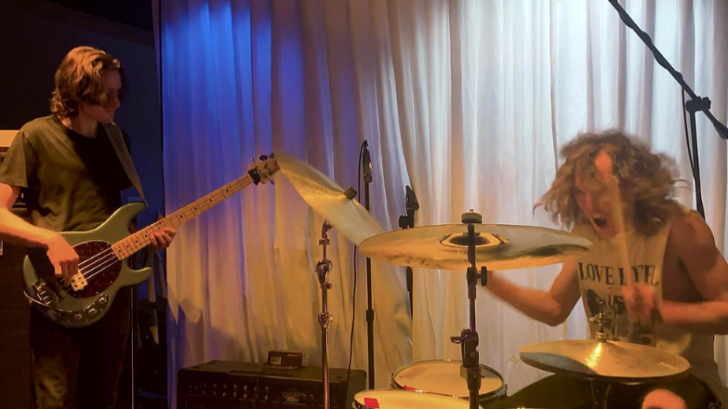 Lars Ulrich’s sons caught him by surprise when they performed the Beatles’ classic “Eleanor Rigby.”

The performance was recorded in coincidence with the drummer’s interview with Salesforce CEO Marc Benioff. Interviews like these, are often streamed over their social media platforms accompanied by a performance by the guest. “I’m like, ‘Nobody wants a fucking drum solo,’” Ulrich explained to Rolling Stone. So instead of performing by himself, he invited his sons Myles and Layne to come up with a song.

The result was shocking when they did their own rendition of the Beatles’ 1966 track.

“There’s been some incredible versions of ‘Eleanor Rigby’ along the way, but I’m pretty sure there’s never been one that had this kind of sound, this kind of feel, this kind of energy and madness to it,” Lars Ulrich said. “I was like, ‘You know what, boys? You done me proud.’”

Ulrich, who described the rendition as “insane,” recorded the insane performance:

“That’s me standing in the corner filming it, going, ‘Holy fuck!’”

Both of his sons are college students and now stays at home due to schools being shut down amid the COVID-19 pandemic. Myles 21, attends Berklee College of Music, and Layne 19, attends NYU as a freshman.

“In every room of the house, we have acoustic guitars and basses lying around, so you can always pick up a guitar and jam,” Lars revealed. “It’s great to have a guitar in the kitchen or family room.”

Metallica’s drummer, a proud father, was grateful for his sons’ interests in music.

“When I was their age, my tastes were literally just half an inch wide,” he admitted. “When I was 19, it was New Wave of British Heavy Metal. That was it. But between the two of them, it covers so much ground. Both of them are huge Radiohead fans; they listen to a lot of Arctic Monkeys, they definitely listen to a lot of more, like, noise rock, White Stripes and Jack White, and a lot of punkier stuff.”

“When James [Hetfield] and I were 19 years old, if it wasn’t exactly what we were listening to, it was like, ‘Eh’ — we didn’t want to know. It wasn’t until we got with Cliff Burton and Kirk [Hammett] that we started kind of broadening our horizons a little bit.”

Ulrich became excited about what the future holds for his sons after their Beatles’ cover:

“It just feels like there’s increasingly less and less madness and unpredictability in music,” the Metallica drummer opined. “And when I see that clip, it just feels, like, holy fuck, it’s like a moment. If they can bring that out to the world and not have it be too watered down or overproduced, then that’s certainly promising for what could come.”

As for Metallica news, Ulrich remains positive that they will be able to create new music while in quarantine. During his interview with Benioff, Ulrich admits that the group is “trying to figure out” how to make and record new material while they are at their respective homes. “That’s obviously something that we’re circling and we’re very excited about.”