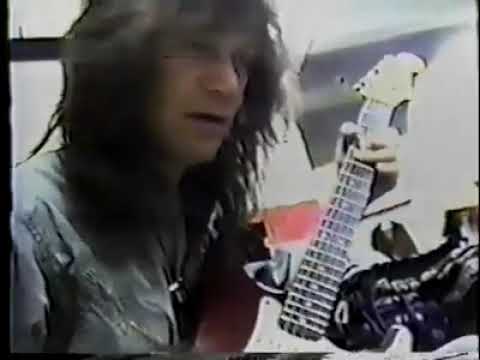 On October 6, 2020, the world mourned the death of one of the most influential rock guitarists in music history. Considered by many to be a guitar god and a true rock legend.

He dominated the hard rock scene in the 70s and 80s accompanied by the legendary band that proudly bears his last name, Van Halen. His speed, his frenetic style, his creativity, and his extraordinary skill on the guitar, registered him in the eighth place in the list of the best rock guitarists of all time, compiled by Rolling Stone magazine.

During his lifetime, “Van Halen” album sales exceeded 75 million sales. Eleven of their studio albums reached the top 20 of the Billboard music charts. The band has the most #1 hits on Billboard’s MainStream, a record that is registered in the Guinness Book of World Records. A total of 26 albums, 16 singles, 2 box sets, and 5 videos by the band were produced, marketed, and sold.

Eddie Van Halen is considered one of the greatest guitar virtuosos in rock history, he is responsible for the development and popularization of the tapping technique, now widely used by guitarists of all styles. Unfortunately, Eddie Van Halen has transcended this world after fighting for around 20 years against throat cancer.

In this rare footage, a fan went backstage and asked him to play his strat guitar and EVH complied. Keep going for the video below: