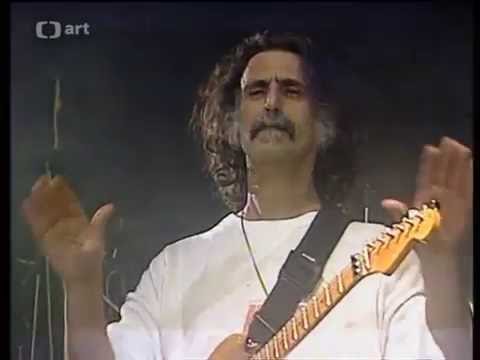 Watch Frank Zappa’s last performance, 30 years ago, in Prague, at a special concert to celebrate the departure of the Soviet army from the city. The concert was called “Adieu Soviet Army”.

In 1990, shortly after being elected president of Czechoslovakia, Václav Havel invited Frank Zappa to visit Prague, where he was received as a national hero because for years he was the figure that represented freedom of thought, very similar to what The Beatles represented for the Soviet people in the 1960s.

The writer offered Zappa the position of ambassador to the West in Commerce, Culture and Tourism, which the rocker accepted without hesitation and in no time he had several ideas to implement immediately. Only weeks after the appointment, the George Bush administration, through then-Secretary of State James Baker, who diverted a European tour to meet with Havel, urged the Czech president to remove the composer from office because it did not seem right that a US citizen served the government of another country, much less one that was asking for financial help.

Baker was blunt: “Havel can do business with the United States or he can do business with Frank Zappa.” The Czech government gave Zappa the unofficial position of cultural attaché. They remained friends until the guitarist’s death in December 1993, a victim of cancer, the same disease that 18 years later, on December 18, 2011, ended the life of Václav Havel. The playwright died just three days before the 71st anniversary of Frank Zappa’s birth.

Zappa mistrusted the human race. He argued that we are all stupid until proven otherwise. He declared that he had no friends, to the point that he only recognized his wife and children as such. He was famous for his satirical comments.