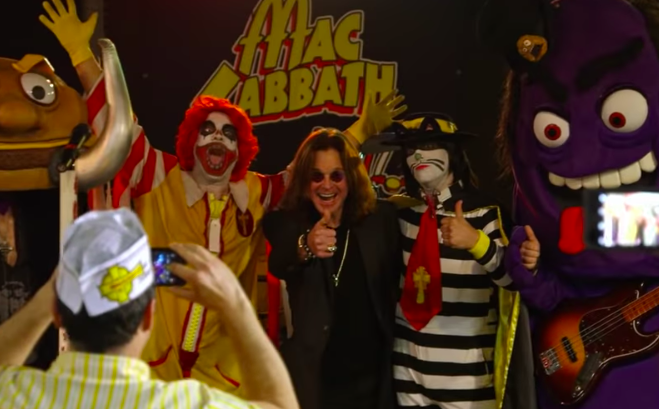 The Prince of Darkness has witnessed one of the most extravagant tributes to Black Sabbath in history. Mac Sabbath is a band that tries to raise awareness of the dangers of abusing junk food by parodying the emblematic heavy metal band from Birmingham combining their songs with the iconography of the famous McDonald restaurant chain. Ozzy Osbourne had the opportunity to personally meet the formation led by Ronald Osbourne.

Ozzy & Jack’s World Detour is a television show that airs on AXS TV and follows the iconic duo on an unforgettable journey within the United States and Europe. On a recent episode, Ozzy got a chance to see a hilarious rendition of Black Sabbath’s “Iron Man”. As you may recall, the song was released on Black Sabbath’s 1970 album “Paranoid” and was a huge hit.

The lead singer of Mac Sabbath has admitted to Rolling Stone how challenging it can be to lead this band: “Being Ronald Osbourne, the front-clown for Mac Sabbath, isn’t easy. I have to meet all these fry-by-night ‘Drive-through metal’ icons like Burger King Diamond, Cinnibon Jovi and KFCC DeVille, look them in the eye and pretend like my indigestion is not acting up. Today is quite different. Today I met Ozzy Freaking Osbourne. Some big clown shoes to fill.”

Mac Sabbath released in 2017 his debut ‘Pair –A – Buns’ (a bun being the type of bread used in making hamburgers), a parody of ‘Paranoid’, Black Sabbath’s second album. What started as a joke has ended up taking the quartet on a tour of the United States and even performing at the UK Download Festival in its 2015 edition.