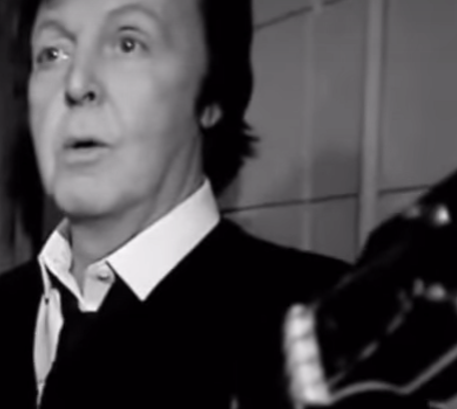 When everyone shouted “OOOOHHHH,” this clip suddenly mimicked an episode of The Sopranos.

Paul McCartney accidently dings his Hofner bass on the ceiling just before the event. Backstage at the Dublin O2 during the 2009 Good Evening Europe Tour.

Yes, the ding did add to the bass’ value, especially considering that Paul did it and that it was recorded on film. McCartney, the musical Genius, may occasionally be a clumsy oaf. Every instrument owner is familiar with the depressing sensation you experience when you bang your instrument against a wall or anything similar.

Paul played two Hofners when performing with The Beatles; his first one, a 1961 model, and was believed stolen when Let it Be was being recorded. He also had a 1963 model, which you can see in this video, and used it to perform on the majority of the records, notably Let it Be and Abbey Road as well as the rooftop performance.