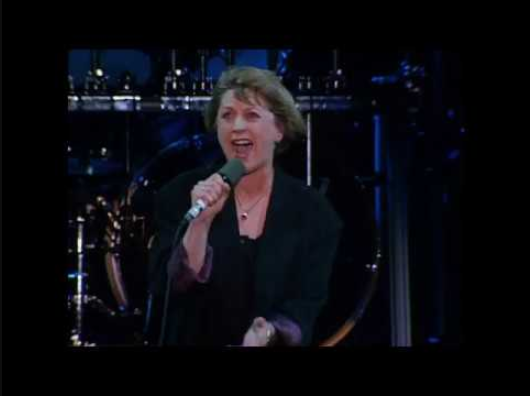 Three decades ago this month, 120,000 fans gathered at the grounds of the Knebworth House in Knebworth, England, for one of the biggest historical concerts in the the U.K. The lineup featured Tears for Fears, Status Quo, Cliff Richard and the Shadows, Robert Plant with surprise guest Jimmy Page, Genesis, Eric Clapton, Phil Collins solo, Dire Straits, Elton John, Paul McCartney, and Pink Floyd.

Selecting an act to fill out the night presumably wasn’t easy, but the organizers conclusively went with Pink Floyd. They hit the road in 1987 to support their comeback LP A Momentary Lapse of Reason and showcased that they could crowd stadiums even without Roger Waters. They’d been off the road for almost a year when Knebworth became, but they put the band back together for a seven-song classics like “Money,” “Comfortably Numb,” and “The Great Gig in the Sky.” “Sorrow” was the only selection from their newest album.

As a surprise, they brought out vocalist Clare Torry for “The Great Gig in the Sky.”

Back in 1973, Torry was brought in to Abbey Road studios near the end of the Dark Side of the Moon sessions to assist them to complete the song. Keyboardist Richard Wright had written the instrumental part, but they didn’t entirely know how to proceed from there.

“The only person that really said anything [to me] was David Gilmour,” Torry told writer John Harris in 2005. “That’s my abiding memory. I don’t remember really speaking to any of the others. I went in and they just said, ‘Well, we’re making this album, and there’s this track — and we don’t really know what to do with it.’ They told me what the album was about: birth, and death, and everything in between. And I said, ‘Well, play me the track.’ They did that, and I said, ‘Well, what do you want?’ They said, ‘We don’t know.’”

On her first attempt, she tried out some generic lines like “Ooh-aah, baby, baby — yeah, yeah, yeah,” but they told her to try some longer notes and really lock into the emotion of the song. “I remember thinking to myself, ‘I really, really do not know what to do,’” she said. “And perhaps it would be better if I said, ‘Thank you very much’ and gave up.’ It wasn’t getting anywhere: it was just nothing. That was when I thought, ‘Maybe I should just pretend I’m an instrument.’ So I said, ‘Start the track again.’”

She then closed her eyes and delivered an emotional howl from the depths of her soul. The band told her to try it one more time, but halfway through she stopped. “I realized that I was beginning to be repetitive; derivative,” she said. “It didn’t have that off-the-top-of-the-head, instantaneous something. It was beginning to sound contrived. I said, ‘I think you’ve got enough.’ I thought it sounded like caterwauling.”

She left the studio that day not grasping if they’d use her part. It wasn’t until she purchased the record and saw her name in the credits that she knew her part made the cut. Pink Floyd gave her nothing more than thirty quid and free tickets to their concert at Earl’s Court for her works.

In 2004, she decided to sue the group for royalties. The issue was settled out of court and they’ve never spoken about the resolution openly, but the song is now credited to Wright/Torry.