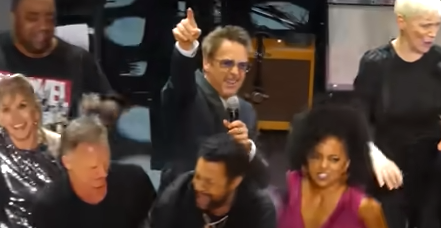 In collaboration with the Rainforest Foundation Fund, String and his wife Trudie Styler began presenting the yearly “Rock for the Rainforest” charity concert in 1991. At the 2019 edition, Robert Downey Jr. and Bruce Springsteen joined Sting onstage to recreate the iconic Journey song “Don’t Stop Believin’.” Sting usually performs at the events.

According to Guinness World Records, the Rock for the Rainforest concerts were the biggest environmental fundraising occasion ever. By 2004, it had generated more than $20 million for indigenous communities that live in rainforests all around the world.

The performances are often performed at New York City’s renowned Carnegie Hall in Midtown Manhattan, however the 2019 edition took place at the Beacon Theatre instead. Along with stars like Downey Jr. and Springsteen, that year also included performers like James Taylor, Ricky Martin, John Mellencamp, Shaggy, H.E.R., and the Eurythmics.

When talking about the show’s 2019 host, Sting criticized Brazil’s authorities for not protecting its rainforests.

“Amazonia is on fire at an unprecedented rate,” he stated. “80% up from last year and with 39% more deforestation – and the world is suddenly taking notice. Populist leaders citing nationalist agendas, or claiming that climate change and its handmaidens are a hoax, are guilty of much more than standing by and doing nothing. This is criminal negligence on a global scale.”

Over the years, some have argued that the Amazon rainforest should be regarded similarly to the “lungs of the Earth,” since it helps to lower the amount of carbon in the atmosphere, cleans it, and replaces it with oxygen, which is essential for both plant and animal life.

Regarding this, Sting stated:

“Calling Amazonia the ‘lungs of the Earth’ may not be exactly anatomically correct, but it does convey that it is a vital and irreplaceable link in the chain of wellbeing on our planet in the increasingly narrow band of climatic vectors where human life can survive. We simply cannot afford to let it burn. We are fast approaching the tipping point where the fires will continue to burn and cannot be put out.”

Sting is passionate about this issue, and he singled out Brazilian President Jair Bolsonaro. However, the Brazilian President had “voiced that he is no friend to the indigenous people and now he is reneging on land treaties already signed, opening up new territories and dismantling the scientific and human rights organisations in Brazil.”

Watch the video of Downey Jr., Springsteen, Sting, and John Mellencamp singing the timeless Journey song “Don’t Stop Believing” below to get a sense of the performance.