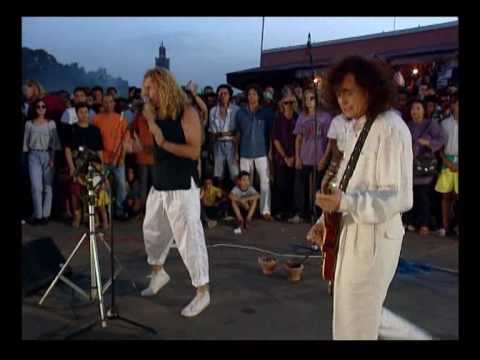 For the first time since the loss of Led Zeppelin’s drummer, John Bonham, 14 years prior, Jimmy Page and Robert Plant worked on a new musical project in 1994. A request to participate on MTV’s famous show Unplugged prompted the reunion. But, in order to avoid any bit of nostalgia, Page and Plant left out former Zeppelin bass player John Paul Jones from the band, which they dubbed Unledded.

The final album and DVD include a collection of Zeppelin tunes reimagined with the aid of an Egyptian ensemble, an Indian singer, and the London Metropolitan Orchestra, but by far the most intriguing aspect of the endeavor was a trio of new music performed with local bands in Marrakesh, Morocco. Those performances, which can be seen here, were made possible through a collaboration with traditional performers from the Gnawa minority, whose sub-Saharan forefathers were taken to Morocco as slaves hundreds of years ago.

“We’d never met the Gnawa when we went there,” said Plant in a 1994 interview, “but they were very patient, and smiling is a great currency.” Gnawa music is traditionally performed for prayer and healing, and differs from other North African music. “They play a kind of music which is much more akin to the music of the Mississippi Delta than it is to do with Arab music,” Plant said in another interview. “It’s haunting, seductive, and quite alluring.”