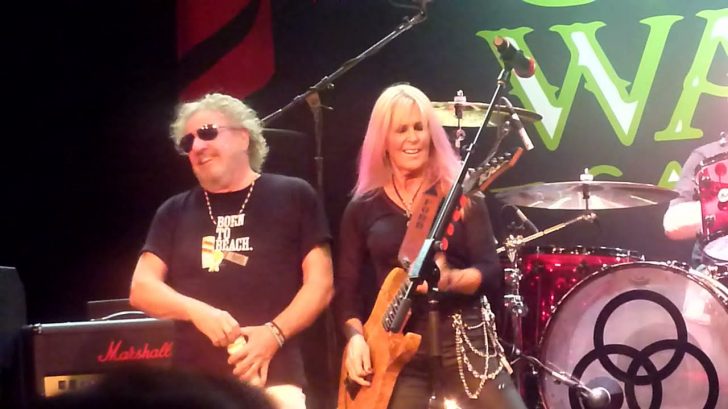 Recently, guitarist Lita Ford and Sammy Hagar of The Circle played Led Zeppelin’s “Rock and Roll” on the same stage. After the concert, they both posted recordings of the performances to their Instagram accounts.

On October 29 and 30, 2021, and November 5 and 6, 2021, Sammy Hagar and Friends in Strat Residency gave their most recent Las Vegas concert. All of the tickets for these performances soon sold out since the audience adored them. As a result, Hagar had to increase the number of performances for the Sammy Hagar & Friends residency by two.

Hagar told his supporters at the conclusion of the performances that he and his band will return to the stage in 2022. He declared that there would be multiple performances during the Strat residence in the start of 2022. His shows were split into two halves, the first of which aired on February 9, 2022, and the second of which ran from March 23 to 26.

Sammy Hagar and the Circle performed at The Strat Hotel on March 25, and former Runaways guitarist Lita Ford joined them on stage. On Instagram, Sammy Hagar posted a video of the performance and gave credit to the musicians that joined them for their 12-show run at the Strat. Led Zeppelin’s “Rock And Roll” and Montrose’s “Rock Candy” were performed by the pair.

Furthermore, Lita Ford posted a clip from the performance and praised Hagar and the Circle for rocking the stage with them and for giving them the “red carpet treatment.” Due to the strength of their collaboration and the popularity of the Led Zeppelin song, fan videos of their performance were already posted on various YouTube channels and gained hundreds of views in less than a day.

“Thanks to all the special artists that joined us during our 12 show residency at the Strat Vegas. The final weekend was quite the party. Even the soundcheck was a blast.”

“Such an amazing time last night in Las Vegas at the Strat Vegas with Sammy Hagar and The Circle. Thanks for the red carpet treatment, a world-class act, and for rockin’ the house!”

Led Zeppelin’s “Rock and Roll” performed by Sammy Hagar and Lita Ford in the video clip below.