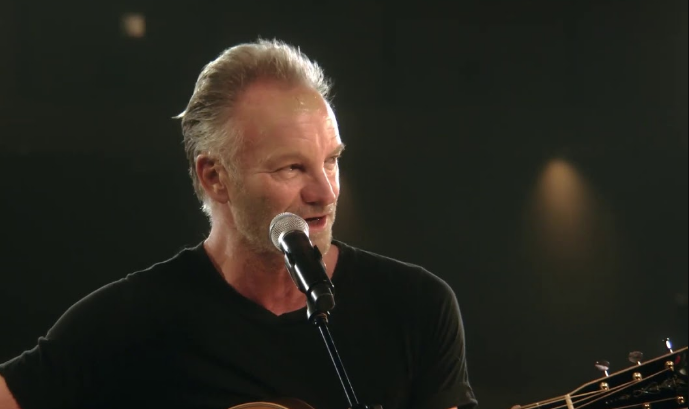 Recently, Sting and Shaggy appeared on the installment of Rolling Stone’s In My Room IGTV series, and a few days later, the singer streams his own video, performing from his home in Wiltshire, England.

“I’m lucky enough to have a recording studio here, where I can work everyday,” he says. “I’m very fortunate; I’m very grateful. I’m also grateful for our healthcare workers, who are doing an extraordinary job, risking their lives everyday on the front line. The best thing that we can do is to help them, and not to get sick, and not to add to their workload, because we are all in this together.”

Sting performs a rendition of the Police’s signature song, “Message in a Bottle,” singing live alongside a percussive and backing vocal track. He then followed it with “Fragile,” a single from his solo album …Nothing Like the Sun.

“Some of my favorite cities in the world have been hit by this virus,” Sting said afterwards, introducing the next song, “not least New York City, my adopted home. So this is a song about New York in better times that will return.” That song, of course, is “Englishman in New York.”