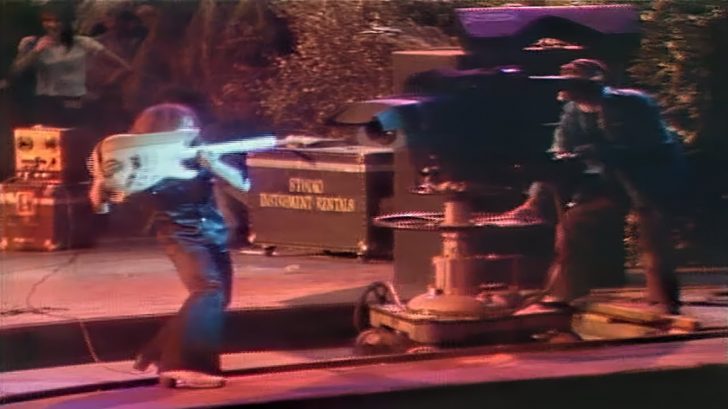 The organizers of the California Jam learned the hard way in 1974 not to upset Ritchie Blackmore when DEEP PURPLE Mark III headline their festival.

In 1974, DEEP PURPLE was one of the biggest rock album sellers across the Atlantic. The British released “Burn” in February which saw the debut of 23-year-old David Coverdale and Glenn Hughes, respectively unknown singer and ex-singer / bassist of TRAPEZE, who replaced Ian Gillan and Roger Glover. The first brought blues to the hard rock of DEEP PURPLE, the second to soul and funk and the result made this eighth record a monument of rock and their discography. It should be noted in passing, something rare enough to be underlined, that “Burn” was certified gold with more than 3 million-plus sales apiece.

During their set, Ritchie Blackmore smashes his guitar on the camera which has bothered him all evening before sticking his handle into the lens, breaking the lens in the process, sprays another Stratocaster before sending it into the audience, throws his speaker in the pit, methodically destroys his instruments… And sets fire to his amps which, at his request, had been sprayed with gasoline by a roadie. All this while the rest of the group continues to jam as nothing has happened. What he didn’t know was that the organ had planned explosions to close their concert.