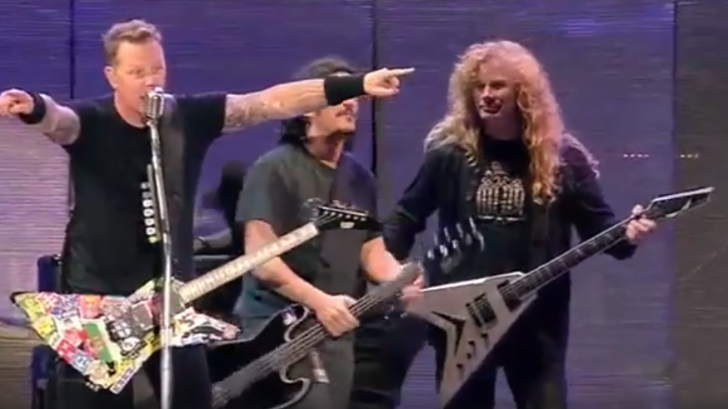 Lucky Bastards Those Who Have Seen It Live!

This happened a couple of years ago, but for those who have missed it out. YOU SHOULD SEE THIS!

Everybody was definitely in AWE over the big jam at the end of the show featuring members of the Big Four, Metallica, Slayer, Megadeth, and Anthrax.

The Four Biggest Bands in Thrash Metal scene just made history with this performance. This wasn’t just a METAL MOMENT it was a freaking METAL HISTORY!

This performance was so fucking metal that you’d probably start to freak out if you were there. It would have been freaking too much to handle. Dave Mustaine (Megadeth) took his part of the song in his own style. Singing it like it was a Megadeth stuff. While James Hetfield (Metallica) held it up in the vocals, belting all the high notes. And Joey Belladonna (Anthrax) gave it a trembling tenor vocal.

But no matter how awesome this performance was, the sight of Dave Mustaine playing with Metallica side by side ONCE AGAIN will always be the greatest moment in metal history. They’ve finally buried down the hatchet.

It’s a shame that Kerry King, Tom Araya, and Dave Lombardo missed out this epic jam. Only one member of the Slayer was able to perform and backed up the Godfathers of Thrash Metal.

Overall, this performance was LIT and EFFING SICK! (Woulda been great to see a lead guitar duel between Hammett and Mustaine.)

So here you go, see for yourself. Tell us what you think…

(The big four) metallica, megadeth, anthrax and slayerCancion : am i evil?#Craneo