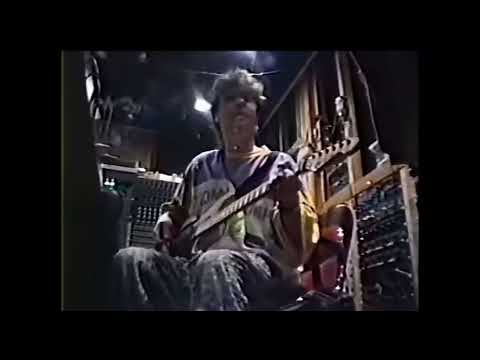 Rare footage of Eddie Van Halen brings us one of those files that have been gathering dust for years and now they see the light. Following the recent discovery of Van Halen’s long-lost dinosaur music video, another clip has recently been unearthed. What this shows is Eddie Van Halen in his home studio.

The video in question shows the guitarist playing the riff of “Amsterdam” several years before the public release of the song. The clip appears to have been shot in the mid-’80s, but the song wasn’t officially released until it appeared on the 1995 Balance album.

We don’t really know when the video was recorded. However, Van Halen’s haircut and “Team Jams National Champs 1986” T-shirt indicate that the studio jamming probably took place in late 1986 or early 1987.

Eddie was open about his dissatisfaction with the track’s final path, telling Guitar World in 1996:

“It’s not like I suddenly wanted Sammy to be my puppet or anything, but once in a while I would take issue with a specific lyric or line.

“For example, I always hated the words ‘wham, bam, Amsterdam,’ from Balance, because they were all about smoking pot – they were just stupid. Lyrics should plant some sort of seed for thought, or at least be a little more metaphorical.”