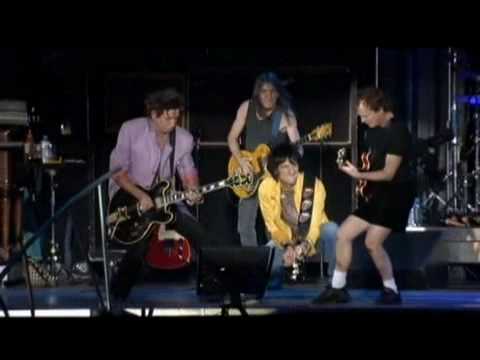 On March 11 AC/DC was inducted into the Rock & Roll Hall Of Fame in New York and that night they performed on stage, this seemed to whet their appetite for live performances, and in the month of June and surprisingly they did a series of concerts in Germany, in Berlin and Munich, then in other cities of Germany they return to the stage invited by the Rolling Stones.

Thousands of people gathered in Festwiese, Leipzig Germany for a once in a lifetime performance. For fans around the world, the event went down in history as the day the Rolling Stones and AC/DC came together on stage.

The AC/DC rock the place with their signature power, and the Rolling … you have to take your hat off. The musicality and dynamism they put on stage at this point in the show are incredible. In addition, they performed the B.B. King’s “Rock Me, Baby” classic, along with Malcolm and Angus, having a great time.

Nothing unnerves us more than AC / DC being joined by rock legends alike.