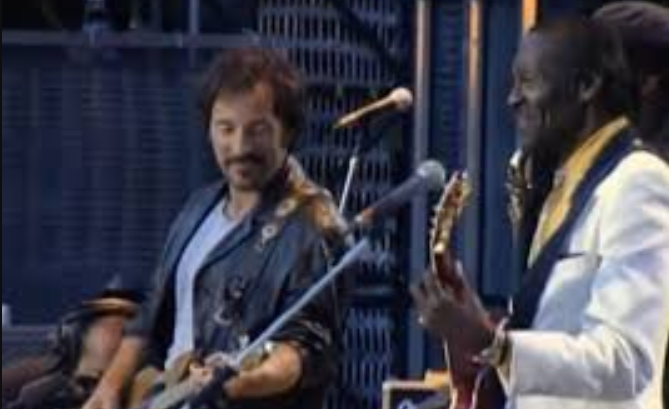 Throughout his extensive career, the late Chuck Berry collaborated with other rock stars. Artists who learned by his side and who covered some of his great songs with the Missouri genius.

Bruce Springsteen, Tina Turner, The Rolling Stones, John Lennon and Eric Clapton are some of the musicians with whom he collaborated, performances in which he exhibited his unforgettable ‘duck walk’, the ‘duck walk’ that became one of his signs of identity.

Berry’s legacy is even revealed in the cinema. Michael J. Fox performed his ‘Johnny Be Goode’ in ‘Back to the Future’, thus creating one of the most recognizable scenes from the 80s cinema.

“Chuck Berry was the greatest rock performer, the greatest guitar player, and the purest rock lyricist I have ever met,” wrote Bruce Springsteen, who had a close relationship with him.

It is difficult to measure the impact and footprint of Chuck Berry’s Rock and Roll, one of the first myths of this effervescent and youthful style of music that changed popular music at its roots in the 20th century.

The writer of the unforgettable songs like ‘Johnny B. Goode’ or ‘Maybellene’, Chuck Berry died at the age of 90 at his home on the outskirts of San Luis (USA).

Chuck Berry performed with Bruce Springsteen & the E Street Band his greatest contribution to the work of rock n’ roll, “Johnny B. Goode” at The Concert for the Rock and Roll Hall of Fame in 1995 in Cleveland, Ohio.